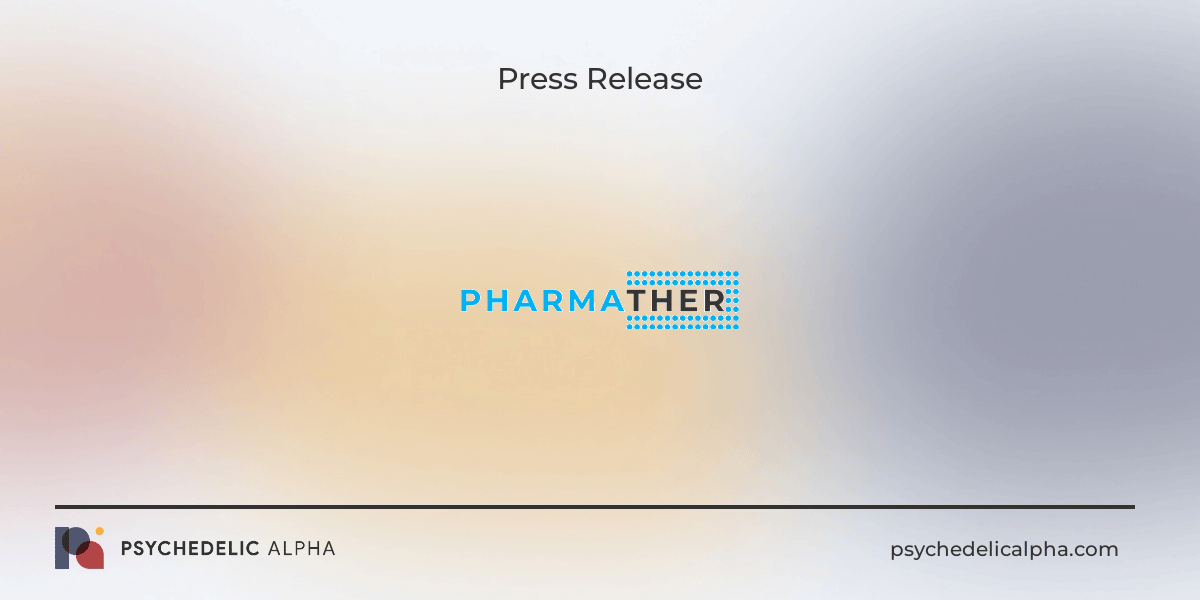 Announced positive efficacy and safety data from Phase 1/2 clinical study of ketamine in the treatment of levodopa-induced dyskinesia in Parkinson’s disease patients, with 100% of patients treated with ketamine demonstrating a reduction in dyskinesias as measured by the Unified Dyskinesia Rating Scale showing a 51% reduction from baseline during Infusion 2 (p=0.003), 49% at 3-week (p=0.006) and 41% at 3-month (p=0.011) post-ketamine

TORONTO, Oct. 05, 2022 (GLOBE NEWSWIRE) — PharmaTher Holdings Ltd. (the “Company” or “PharmaTher”) (OTCQB: PHRRF) (CSE: PHRM), a specialty pharmaceutical company focused on developing and commercializing novel uses and delivery forms of ketamine to treat mental health, neurological and pain disorders, is pleased to announce that the United States Patent and Trademark Office (“USPTO”) granted US Patent No: 11,426,366, titled “Compositions and Methods for Treating Motor Disorders,” which includes claims intended to cover ketamine in the potential treatment of Parkinson’s Disease and motor disorders that cause involuntary or uncontrollable movement or actions of the body (the “Patent”).

Fabio Chianelli, CEO of PharmaTher, commented: “We are pleased with the USPTO grant of the patent covering ketamine in the treatment of Parkinson’s disease and motor disorders. The US patent strengthens our intellectual property portfolio covering novel uses and delivery forms of ketamine. We are advancing the clinical development of ketamine in the treatment of levodopa-induced dyskinesia in patients with Parkinson’s disease, and we are seeking FDA agreement on pursuing approval under the 505(b)(2) regulatory pathway with a potential Phase 3 clinical study.”

On September 16, 2022, the Company announced positive efficacy and safety data from a Phase 1/2 clinical study of ketamine in the treatment of levodopa-induced dyskinesia (“LID”) in Parkinson’s disease via a late-breaking abstract presentation, titled “Subanesthetic infusion of ketamine produces long-term reduction in levodopa-induced dyskinesia” at the MDS International Congress of Parkinson’s Disease and Movement Disorders®.

The Phase 1/2 study was an open-label, dose-finding trial to test the safety, tolerability and pharmacokinetics of low-dose ketamine infusion to treat levodopa-induced dyskinesia in Parkinson’s disease and to find an effective dose-range suitable for outpatient use. Two 5-hour low-dose ketamine infusions were given within a one-week period. The clinical study outcomes measured reduction of dyskinesia, captured with the Unified Dyskinesia Rating Scale (“UDysRS”), and effects on parkinsonian symptoms, captured with the Unified Parkinson’s Disease Rating Scale (“UPDRS”).

The study enrolled 10 subjects with moderate to advanced Parkinson’s disease with a target infusion rate being 0.30 mg/kg/hr. These data highlight that ketamine was safe, well-tolerated, and demonstrated that 100% of subjects treated with ketamine had a reduction in dyskinesias as measured by UDysRS indicating possible efficacy with a large effect size that warrants further investigation in a pivotal Phase 3 clinical study. UDysRS showed a clinically meaningful reduction from baseline through 3 months.

The maximum tolerated infusion rate ranged from 0.20-0.30 mg/kg/hr which was dependent on either discomfort due to dissociation or hypertension. There were no adverse events post-infusion. Analyses of the patient diaries and the pharmacokinetic data are ongoing.

Based on these data, the Company is preparing to engage the FDA to establish the next steps for a planned Phase 3 clinical study to allow for the Company’s proprietary ketamine intravenous product, KETARX™, approval for Parkinson’s disease under the 505(b)(2) regulatory pathway. In August 2020, the Company entered into an exclusive license agreement with the University of Arizona to develop and commercialize the Patent.

Ketamine is an FDA-approved N-methyl-D-aspartate receptor-modulating (NDMA) drug that is widely used as an anesthetic agent either alone or in combination with other anesthetic agents [Smith et al, 1987; Pacheco et al, 2014]. The possible therapeutic effect of low-dose ketamine on levodopa-induced dyskinesia was noted in a retrospective analysis of Parkinson’s disease patients who received ketamine for pain relief. During this analysis, it was observed that the patients experienced an improvement in LID lasting several weeks beyond treatment [Sherman et al, 2016]. These results were corroborated in a test of low-dose ketamine in a rodent LID model, and this possible effect has also been examined in a controlled study [Bartlett et al, 2016]. Ketamine may also have additional benefits in the treatment of pain [Niesters et al, 2014] and depression [Diamond et al, 2014; Murrough et al, 2013], which are frequent comorbidities of Parkinson’s disease.

There is currently no cure for Parkinson’s disease, although some drug combinations are used to treat the disease symptoms. Although the etiology of Parkinson’s disease is not fully understood, it is thought to result from loss of pigmented dopaminergic neurons in the Substantia nigra and their striatal projections, leading to dopamine deficiency in the striatum [Schapira and Jenner, 2011]. This ultimately affects the cortico-striatal system that controls movement. As a progressive neurogenerative disorder of the central nervous system that primarily affects the motor nerve system, symptoms of Parkinson’s disease may emerge slowly and include tremors, rigidity, bradykinesia, and postural instability [Paulson and Stern, 2004]. Also, patients may experience non-motor symptoms such as autonomic dysfunction (orthostatic hypotension, constipation, bladder dysfunction), psychiatric (depression), cognitive and sensory symptoms (pain) [Olanow, et al, 2009]. These non-motor symptoms become more common as the disease progresses. Treatments, including levodopa and dopamine agonists, which restore the dopamine deficits in the brain, have been employed for almost 50 years. However, with continued treatment using levodopa, dose-limiting motor side-effects often emerge. This includes the emergence of abnormal involuntary movements termed Levodopa Induced Dyskinesias, which can be identified in about 50% of patients within five years after initiation of levodopa treatment and in almost all patients within ten years post-treatment initiation. These side effects often limit further dose increases in dopaminergic therapy.

There can be no assurance that the FDA will support any potential request for an expedited path to approval or further development for ketamine in the treatment of Parkinson’s disease.