There are some fascinating histories surrounding psychedelic compounds such as psilocybin, and ‘magic mushrooms’ more broadly. As such, we won’t be exhaustive in our historical account; but rather we provide this brief history in order to provide context to the rest of our resources.

Magic mushrooms are not a new discovery. Some historians suggest that some North African societies were ingesting mushrooms for their hallucinogenic properties as far back as 9000 BC, according to depictions in rock paintings. Meanwhile, Central and South American Indians have historically considered hallucinogenic mushrooms to be sacred, calling them teonanacatl, or “flesh of the gods”.

Aztec and Mayan ruins appear to contain representations of mushrooms:

While this lineage is contested by some, who argue it is an overly mystified and romanticised understanding of magic mushrooms driven by confirmation bias, we do know that indigenous people in Central America use magic mushrooms to this day.

Arrival in the United States

Members of ‘Western’ societies didn’t begin eating magic mushrooms until the late 1950s. Having observed their usage in a ritual ceremony in Mexico, mycologist R. Gordon Wasson documented his experience in Life magazine, published in 1957. The editor titled the photo essay Seeking the Magic Mushroom, and thus the term was coined. You can read the full-colour photo essay here. 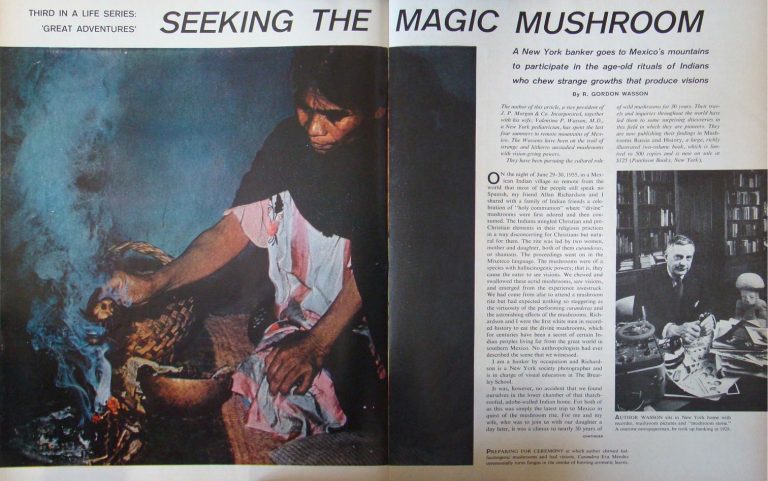 From the mushroom that Wasson brought back from Mexico Albert Hofmann, who ‘discovered’ LSD, isolated the active ingredients. He found psilocybin to be the most important hallucinogenic compound, which is converted to psilocyn once ingested.

Unsurprisingly, this ‘new’ psychedelic compound caught the attention of Timothy Leary, the famous LSD advocate, after he read the Life article. Leary began experimenting with magic mushrooms at Harvard University, and his association with the compounds led to their abiding association with the hippie movement who sought to reveal new forms of spirituality.

As such, in the U.S. magic mushrooms became inseparable from the counterculture; an association that led to their demise. By 1968 so-called ‘magic mushrooms’ were made illegal in the United States, and classed as a Schedule I drug under the Controlled Substances Act two years later in 1970. This was due to the government’s perception that they were being abused, and due to a broader concerted effort to quash the counterculture.

However, these avenues of enquiry were shattered and barred by governments in most Western countries when it became associated with the counterculture in the United States. The resultant government criminalisation led to an abrupt halt to research activity and experimentation surrounding these substances.

Up Next: Future Prospects

How did interest in psychedelic substances re-emerge among researchers after half-a-century of criminalization? And, what are the future prospects for this (re-)emergent space?