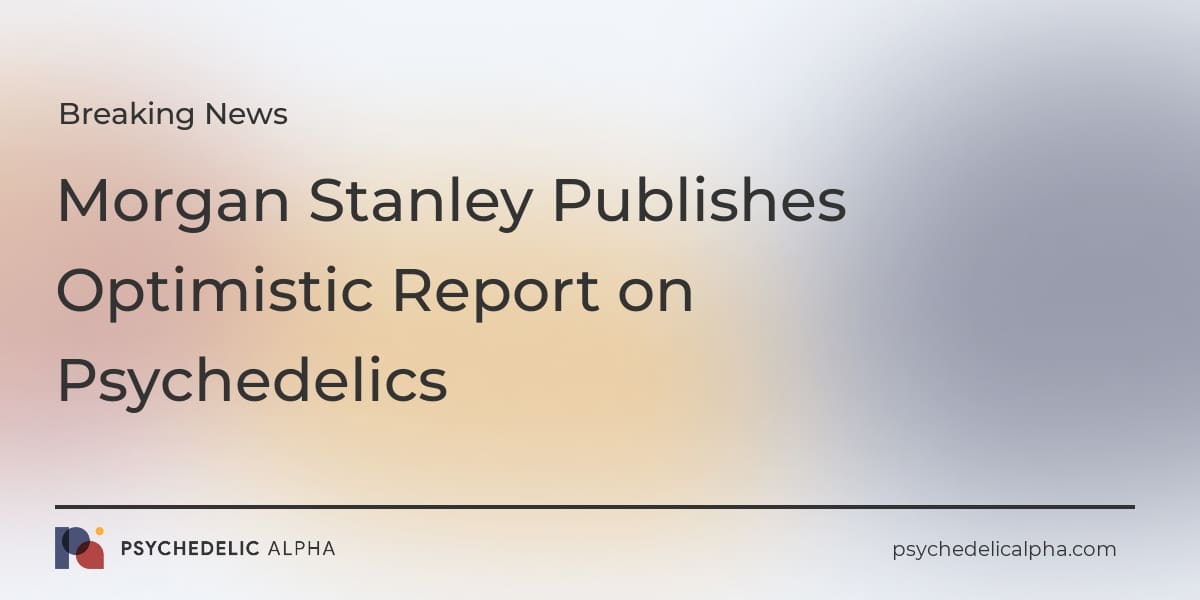 Morgan Stanley has a team of investors and researchers tasked with identifying the next “big idea that has the potential to trigger far-reaching consequences.” The team, operating under the name Counterpoint Global, has now profiled psychedelics in a four-page viewpoint piece (PDF).

Operating under the Morgan Stanley Investment Management (MSIM) banner, Counterpoint is a fundamental equity team with a focus on identifying disruptive and emergent fields in which long-term investments might be made.

The team includes 30 investors and more than a half-dozen subject area experts who focus on themes like disruptive change, consilience, and sustainability.

The report, which aims to share the team’s “proprietary views on a big idea,” begins by providing a very brief history of psychedelic research. Bringing us up-to-date, the authors explain that now, “a second wave of psychedelic research is underway.” This research, which includes “a number of promising academic studies,” has led to the use of psychedelics as medicine garnering “renewed credibility.”

Early results indicate that psychedelic therapy has the potential to fundamentally reshape how we think about and treat not only mental illness but a host of other conditions as well.

The team explain that a number of psychedelic compounds “have a credible chance” of achieving FDA approval.

Beyond PTSD and depression, the Morgan Stanley researchers identify a number of other indications (or, “potential markets for psychedelic drugs,” in their parlance) such as ADHD, addiction, anxiety and chronic pain-related indications.

In assessing its disruptive potential, the authors point to the fact that “no truly new psychiatric drug treatments” have come to market since Prozac, in the 1980s. “Unlike SSRIs, which dull or mask the symptoms of depression and must be taken chronically,” the authors explain, “psychedelic-assisted therapy can change a patient’s fundamental outlook over the course of one to a handful of sessions.”

Beyond mental illness and pain-related diseases, psychedelics have the potential to treat any disease where new neural pathways might improve function.

Psychedelics therapies, then, could be “the next course of treatment in cases where SSRIs fail,” the authors note shortly after mentioning that SSRIs “help only about 25 percent of patients who take them.”

In a very optimistic closing sentence under the report’s Potential markets header, the authors conclude: “Beyond mental illness and pain-related diseases, psychedelics have the potential to treat any disease where new neural pathways might improve function.” We might have hedged a little more there.

In terms of challenges, the authors note “numerous roadblocks to adoption.” The first will be obtaining FDA approval, and thereafter the issue of building out infrastructure and “clinician support.”

The authors mention, specifically, therapist training and the quality of the physical treatment facility, which will “add to the costs and complexity” of providing such therapies.

Decriminalisation efforts are also identified as a challenge, presumably due to their potential to encroach on a medical market; though the point is not expanded upon.

Interest in and openness to psychedelics as medicine are increasing daily as the media’s narrative has changed and promising research on their benefits continues to grow.

Another challenge is the need to overcome “a negative pereption of psychedelics” among clinicians and patients who have been primed by “years of negative press and Schedule 1 Drug status.” The authors do note, however, that “[i]nterest in and openness to psychedelics as medicine are increasing daily as the media’s narrative has changed and promising research on their benefits continues to grow.”

Looking more closely at the commercial side of things, the authors note that differentiation among treatments is a clear unknown, compounded by difficulties in patenting these drugs. Reimbursement, too, will be “vital” to ensuring scalability of this disruptive treatment model.

Aside from some minor issues, such as a conflation between 5-MeO-DMT and DMT and an optimistic timeline for MDMA-assisted therapy for PTSD’s FDA approval, the analysis is largely sound. Of course, the explanation of psychedelics ‘resetting’ the mind is a broad stroke, but the four-page article is aiming to provide an overview as opposed to recounting the various theories that may (or may not) explain the apparent efficacy of psychedelics.

In sum, this is a very optimistic note from Morgan Stanley’s disruption forecasting team… perhaps even too optimistic!

Preparing for COMPASS Pathways’ Phase Data Readout: 2b, or not to be?

Will Australia be the First Country to Reap the Benefits of Psychedelic Medicines? Rescheduling Proposal Submitted to TGA