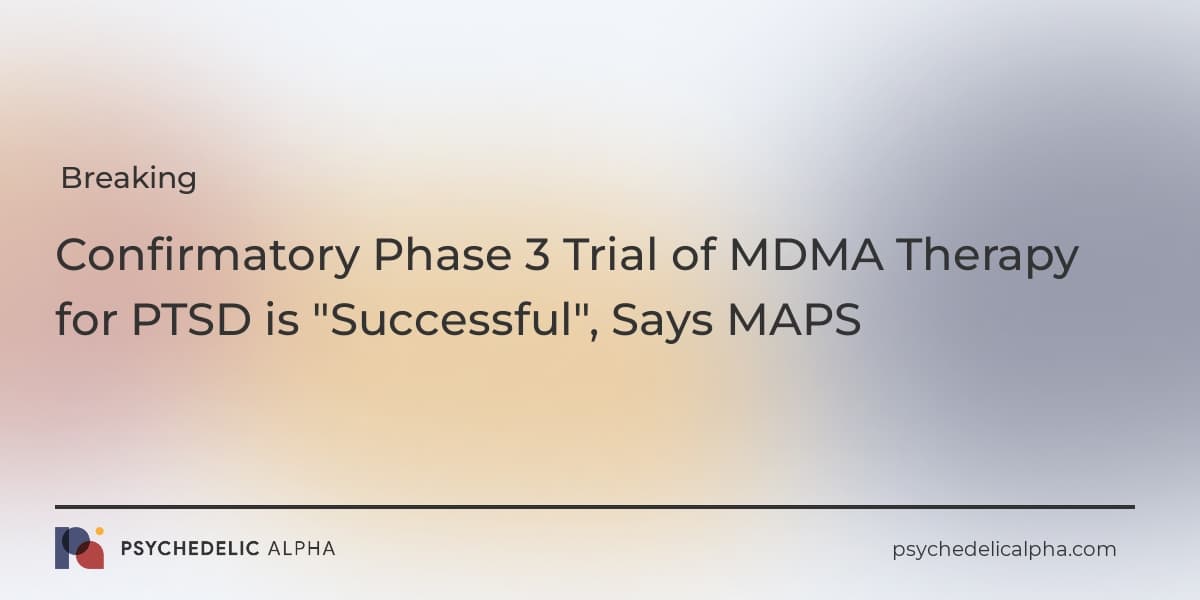 Today, MAPS has announced that its second Phase 3 trial of MDMA-assisted therapy (MDMA-AT) for PTSD confirms prior positive results.

Data from the 104-participant trial is expected to be published in a peer-reviewed journal later this year.

MAPS founder and Executive Director Rick Doblin commented on the 37 year journey that has led to this moment, noting that the “impossible became possible through the bravery of clinical trial participants, the compassion of mental health practitioners, and the generosity of thousands of donors.”

Now, the nonprofit’s wholly-owned subsidiary, MAPS PBC, is tasked with the submission of a New Drug Application and the ensuing commercialisation process.

The nonprofit Multidisciplinary Association for Psychedelic Studies’ (MAPS) clinical research program has achieved an important milestone: a successful confirmatory Phase 3 trial of MDMA-assisted therapy for posttraumatic stress disorder (PTSD). The clinical research program that began in 1992 has been sponsored by the nonprofit MAPS and funded through philanthropic donations. Since 2014, MAPS Public Benefit Corporation (MAPS PBC), a wholly-owned subsidiary of MAPS, has administered the trials.

When I first articulated a plan to legitimize a psychedelic-assisted therapy through FDA approval, many people said it was impossible. Thirty-seven years later, we are on the precipice of bringing a novel therapy to the millions of Americans living with PTSD who haven’t found relief through current treatments. The impossible became possible through the bravery of clinical trial participants, the compassion of mental health practitioners, and the generosity of thousands of donors. Today, we can imagine that MDMA-assisted therapy for PTSD may soon be available and accessible to all who could benefit.

The full data from MAPP2, expected to be published in a peer-reviewed journal later this year, will support MAPS PBC’s new drug application to be filed with the U.S. Food and Drug Administration (FDA).

By 1985, MDMA had been legally used in therapy treatments for a decade, with a growing body of promising anecdotal reports supporting its use. However, increasing social use led the Drug Enforcement Agency to criminalize the use and possession of MDMA that year. In 1986, Dr. Doblin founded MAPS to fund and facilitate research into the potential of psychedelic-assisted therapies; educate the public about psychedelics for medical, social, and spiritual use; and advocate for drug policy reform. A major milestone was reached in 2021 when Nature Medicine published the positive results of the first Phase 3 trial, MAPP1.

MAPP1 and MAPP2, the only completed Phase 3 trials of a psychedelic-assisted therapy, were conducted at 15 sites in the US, Canada, and Isreal. Today, Phase 2 trials are being planned or conducted evaluating MDMA-assisted therapies for conditions closely related to PTSD, such as substance use disorder and eating disorders. Trials of other therapies in combination with MDMA are being planned or conducted, such as couples therapy and group therapy among Veterans. These additional Phase 2 trials will determine if MDMA-assisted therapies may be effective for other conditions or with other treatment modalities commonly used to address PTSD.

ABOUT MAPS
Founded in 1986, MAPS is a 501(c)(3) non-profit research and educational organization that develops medical, legal, and cultural contexts for people to benefit from the careful uses of psychedelics and marijuana. MAPS is sponsoring the world’s most advanced psychedelic therapy research through its wholly-owned subsidiaries MAPS PBC and MAPS EU. Since MAPS was founded, philanthropic donors and grantors have given more than $140 million for psychedelic and marijuana research and education. MAPS has earned both the Guidestar Platinum Seal of Transparency and a 4-Star Rating from Charity Navigator.