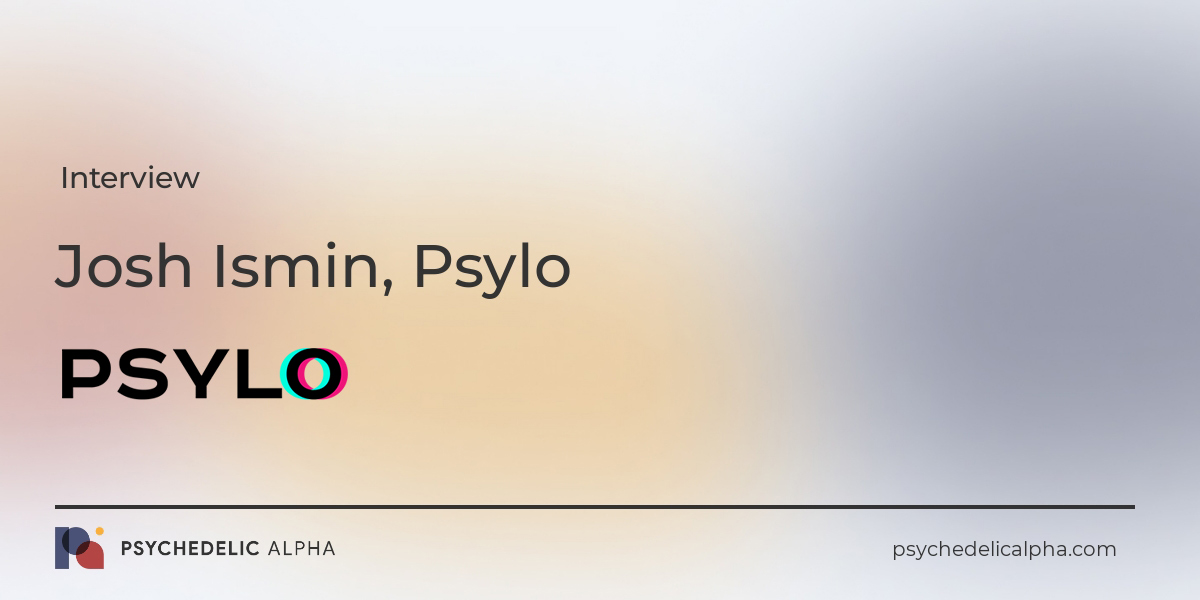 This week we spoke to Josh Ismin, CEO of Psylo: one of Australia’s small crop of psychedelic start-ups. The company positions itself as a “fast follower” to those working on first generation psychedelics. It’s one of a growing field of psychedelic companies—which, to be sure, includes the companies engaged in the development of first generation molecules—looking to discover and develop next-generation molecules that may have more favourable profiles than compounds like psilocybin and MDMA.

Ismin’s most recent pre-Psylo endeavour was investing in ‘alt-protein’, which sparked an interest in biotech. He then had a quadragenarian epiphany when, on his 40th birthday, he was drawn to starting a psychedelic biotech down under.

Psylo is pursuing computationally driven drug discovery and development: an increasingly popular method of augmenting the identification of viable candidates that invokes further jargon-laden disciplines such as AI and pharmacology. Fortunately, Ismin took the time to explain concepts like “virtual docking”, for those of us that aren’t familiar with the process that takes place millions of times in these computational methods.

Let’s start with the basics, and on the more personal side: how did you originally become interested in psychedelics?

Psychedelics were really important to me in my late teens – hugely formative experiences that shaped my worldview. That was in the 90s, and the war on drugs was at its peak. I put that part of my life to the side as I focused on career and family, while always following along when psychedelics occasionally featured in the mainstream press.

What made you decide to convert that interest into a startup?

I was fortunate enough to sell a company a few years ago, which gave me time to explore and consider what to do next. I did some angel investing in the alt-protein space, which kindled my interest in biotech. On my 40th birthday, I had this realisation: I’m going to build Australia’s first psychedelic biotech company. My career has been defined by launching start-ups built around trends from overseas, so Psylo is a natural extension of that.

Tell us about the name, Psylo.

As I started workshopping the idea for Psylo with friends, several pushed me toward putting in an application for the premier accelerator programme in Australia and New Zealand, StartMate. The submission deadline was approaching, and I needed a name to put in the application. Psylo was the first thing to pop into my head, and it clicked.

How did you meet your cofounder, Sam Banister?

After my last company exit, a mentor of mine suggested I hang around universities to find my next big thing. That ended up being really impactful advice. My wife runs a research commercialisation centre at Sydney University, which I used as a networking jump-off point to informational interview researchers and scientists who were interested in psychedelics. All roads pointed to Sam. I knew from the first minute that he was my guy.

Tell us about the three lines of products you’re looking to develop.

We think of these products on a sliding scale of clinical validity and commercial application, where Family 1 has been well validated and has near-term commercial potential and Families 2 and 3 are more speculative, but apply to larger and larger patient populations.

In terms of your sub-perceptual ‘microdose’ family, are you at all concerned about potential links between chronic 5-HT2B agonism and valvular heart disease? If so, is that something you’re seeking to eliminate from this family?

Any company working on chronically dosed serotonergic drugs needs to be concerned with 5-HT2B. Broadly speaking, the early-movers in our space made minor modifications to first-gen psychedelics in an effort to claim chemical novelty. From the outset of our programme 5-HT2B has been a key anti-target. We have been very fortunate in that regard, as 70% of the 150 or so compounds from our iterative design campaign have negligible 5-HT2B activity. This is true of all compounds we’ve progressed to lead optimisation.

What’s the environment for psychedelic startups like in Australia?

There are a handful of Australian psychedelic startups incubated recently, and an increasing amount of research coming out of academia. Australia has one of the most generous R&D tax credit systems in the world, which is a major draw: 43.5% of all R&D spend is rebated at the end of the year. This is a very well trodden path for drug-developers, many of whom run their clinical trials here to take advantage of that incentive.

There are also a number of matched funding offerings available (we were awarded over $200k AUD in matched funding last financial year alone). In terms of psychedelic research, the federal government set aside $15m AUD in public funds to support psychedelic clinical trials, and Sam is an investigator on one such trial looking at psilocybin as a treatment for anorexia nervosa.

Tell us about your joint project with Australia’s national science agency, CSIRO.

CSIRO is currently validating a custom assay that quantifies the ability of our compounds to elicit neuroplasticity in cortical neuron cells, as compared to a number of known psychedelics such as psilocybin and LSD. A positive readout is likely predictive of whether the compounds have anti-depressant type effects. This is a cellular experiment that has fairly high throughput, so we’ll be able to run all compounds we’re currently optimising through it, but we think it will be most critical in lead selection for our psychoplastogen class (Family 3). We were awarded matched funding via a Kickstart grant, and our contribution still receives the 43.5% tax credit rebate, which makes the project incredibly cost effective.

So, you’re using AI to identify a pipeline of next-gen psychedelic drug candidates that may prove effective in the treatment of mental illnesses. This ‘in silico’ (or, “In-Psylico” as I have noticed you styling it) drug discovery method seems to be all the rage right now. How does your discovery platform and strategy differ from other companies looking to identify similar compounds?

We’re optimistic on the prospects of computationally driven drug dev, but our view is that a purely computational approach won’t cut it; the marrying of rational drug design paired with computational tools is the best approach for navigating this complex domain.  Powering AI tools with proprietary real-world experimental data (along with the SAR [structure-activity relationship] of all known psychedelics from Shulgin’s work, and others) is what makes our strategy different.

We use AI in two ways: computational discovery, and pipeline optimisation. On the discovery side, we’ve used large scale virtual docking to discover new compounds to integrate into our pipeline. On the optimisation side, “In-Psylico” is our multi-target optimisation platform under development.

Some of the terms associated with these methods are tricky for non-experts to get a grip on. It can also be hard to imagine how metaphors like ‘lock and key’ and methods like ‘virtual docking’ translate into real-world applications and benefits. What might the implications of a ‘better 5-HT2A docking score’ be, for example?

Here’s virtual docking (with minimal jargon): Psylo uses cloud based services to test if a proposed molecule engages with a virtual replica of the 5-HT2A receptor. Large scale virtual docking is when we do this millions of times with a large set of hypothetical molecules (i.e., they are possible to make, but never have been). This is where the lock and key analogy comes in handy: we computationally attempt to open the receptor’s lock with millions of molecular keys. If the key fits in the lock, we’d say they “dock” to the receptor.

The higher the docking score, the more likely they are to to be potent 5-HT2A agonists in the real world, but the only way to know for sure is to physically synthesise the molecule and screen it in a wet lab experiment. Psylo have now done this and a number of “hits” which docked to our receptor model are confirmed 5-HT2A agonists, and are being integrated into our pipeline for further development.

As we progress through the optimisation phase we re-run all the various iterations of these new molecules through our receptor model to assess their binding scores; our vision for In-Psylico is to integrate models for other receptor targets and antitargets so we have an even greater predictive capability at our fingertips.

In terms of real world applications, we are hopeful computationally discovered compounds from our programme progress through the preclinical milestones and are ultimately developed into next-generation medications. First-generation psychedelics have great promise, but will not work for all indications; Bryan Roth and Tristan McClure-Begley’s closing quote from Nature Reviews Drug Discovery says it best:

“The majority of these commercial enterprises are pursuing formulations and/or specific integrated therapies with existing classical psychedelics, mostly psilocybin… the emphasis at this stage should be on the discovery of new chemical matter with diverse target receptor engagements and intrinsic activities.”

In an interview with Cosmos Briefing, you described Psylo as being ‘fast followers’, referring to the fact that you almost certainly won’t be among the first psychedelics to market. What makes you confident that the benefits of your new chemical entities (vs. the first set of psychedelics heading toward approval) will justify the potential bump in their cost?

We sometimes refer to Psylo as a “fast follower” to draw a distinction between ourselves and the early movers focused on first generation psychedelics. Probably the more appropriate analogy is first in class vs best in class. Psilocybin will be an efficacious option for some, but it will also serve as a powerful starting point for innovative drugs serving unmet needs in the years ahead, and all the studies of first-generation psychedelics will help inform those developments.  Remember, 5-HT2A has been a drug-development liability for decades.

I’d push-back on the assumption that later market entrants will have higher costs; our shorter-acting psychedelic from Family 1 will be less resource intensive to administer, so the costs should be lower. Families 2 and 3 provide safety benefits and have the potential to address needs unmet by first-generation psychedelics. It’s too early to compare the commercial mechanics of psilocybin vs non-hallucinogenic psychoplastogens, for example.

Do you intend to progress your drug candidates to in-human studies, or are you hoping to partner or licence out?

Both. We will have clinical candidates for each of our product families in 12 months’ time, with at least one entering IND-enabling studies later next year. We are confident the diversity of our pipeline will position Psylo as an attractive co-development or in-licensing partner.

What are your biggest headwinds right now?

Time is a finite resource, and drug dev takes time – we apply nimble start-up principles that maximise coordination/collaboration, and minimise idle time. The team love and hate that (scientists do not like deadlines) but it’s working for us and we’ve underpromised and overdelivered at every step so far.

To end: what makes you most excited about building Psylo right now?

There isn’t anything about Psylo I’m not excited about, but I’m really looking forward to the transformation we’ll see from being a discovery oriented company to a patient focused company. I can’t wait for more talented people joining our ranks and helping translate what we’re doing in the lab toward real-world impact.

Excited by Psylo’s “marrying of rational drug design paired with computational tools”? Well, you’re in luck: the company is currently hiring for computational and medicinal chemists.

Visit their profile on our Psychedelic Jobs board to learn more.