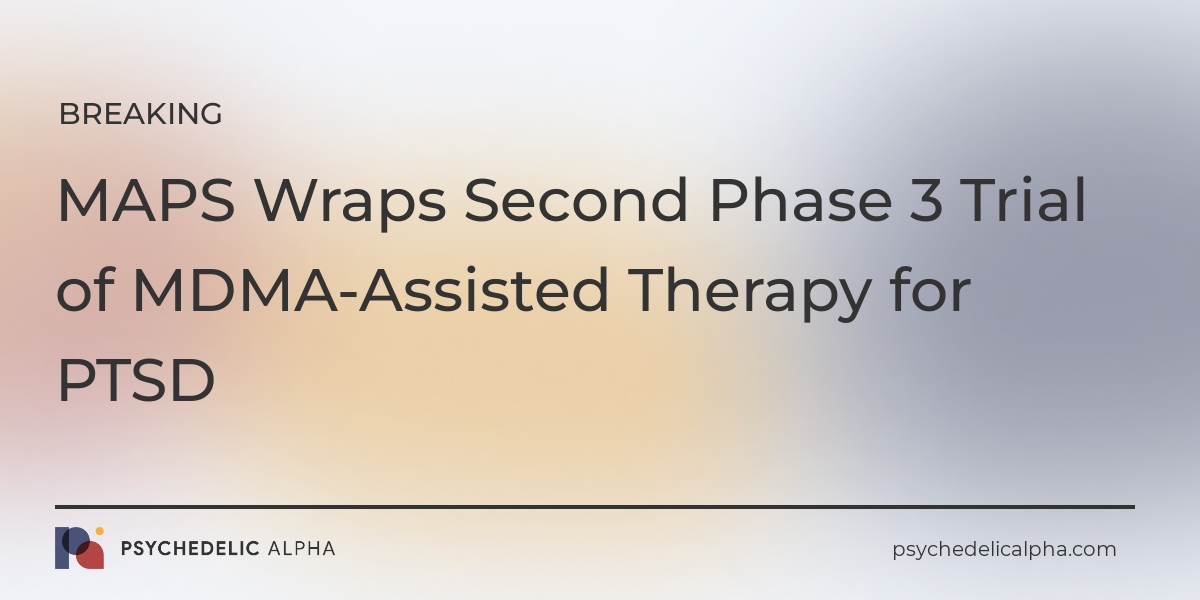 MAPS PBC has completed its second Phase 3 study of MDMA-Assisted Therapy (MDMA-AT) for PTSD, with the final participant visit of its MAPP2 trial having taken place. We broke the news via Twitter last week, but today the organisation has shared a press release with further details.

Our reporting was based on monitoring of clinical trials registries, which showed that the study had been completed slightly ahead of schedule, with a primary and secondary completion originally slated for December 12th 2022 and March 5th 2023, respectively. The trial also appeared to over-enrol slightly, with 121 patients vs. the originally-anticipated 100.

The company expects to have top-line data in the first quarter of 2023, which will inform a New Drug Application (NDA) submission to the FDA as early as Q3 2023. Generally, FDA’s review teams aim to take 6 to 10 months to make a decision on whether to approve an NDA, assuming the package is complete. While MDMA-AT will benefit from its Breakthrough Therapy Designation, it’s also a new molecular entity to the FDA which entails a slightly longer process (usually tagging on two months to the timeline). It’s also likely that MDMA-AT will be subject to Risk Evaluation and Mitigation Strategies (REMS), which will take time to devise and implement.

MAPP2’s protocol was very similar to MAPP1, the company’s first Phase 3 trial. A key difference, however, was the enrolment of patients with moderate PTSD alongside those suffering a severe diagnosis. MAPP1, meanwhile, only enrolled those with a severe PTSD diagnosis. MAPP2 was also more representative, with people of colour representing more than half of those in the study.

“This has been a decades-long journey”, said CEO Amy Emerson, who started as a pro bono consultant to the nonprofit MAPS nearly 20 years ago back in 2003.

The below content is a press release from MAPS PBC

The top-line results are expected in the first quarter of 2023. This is the second of two Phase 3 pivotal trials and will be the basis for the New Drug Application (“NDA”) expected to be submitted to the U.S. Food and Drug Administration (“FDA”) in the third quarter of 2023. The FDA granted MDMA-AT Breakthrough Therapy Designation, a process designed to expedite development and review of drugs intended to treat serious conditions and that demonstrate substantial improvement over available therapies.

“The completion of our confirmatory Phase 3 study brings us closer to potentially achieving our goal of delivering MDMA-assisted therapy to the millions of Americans with PTSD who are grossly underserved by existing treatment options,” said Amy Emerson, chief executive officer, MAPS PBC. “This has been a decades-long journey born out of a desire to explore the potential of MDMA-assisted therapy to treat various mental health conditions. Our progress to date would not be possible without the tireless commitment of the investigators, therapists, clinical trial participants and of course MAPS and the thousands of donors who have funded our research to date.”

The first Phase 3 study, MAPP1, examined the safety and efficacy of MDMA-AT versus therapy with placebo control in treating individuals with severe PTSD. MAPP1 demonstrated that 88 percent of the participants treated with MDMA-AT had a clinically significant improvement in their PTSD symptoms and 67 percent no longer qualified for a PTSD diagnosis. The most common adverse events in the MDMA group were muscle tightness, decreased appetite, nausea, sweating, pupil dilation, and feeling cold; no serious adverse events were reported.

The MAPP2 study protocol was essentially the same as the first Phase 3 study with two primary differences. MAPP2 enrolled participants with moderate and severe PTSD, while participants in MAPP1 had severe PTSD. In addition, enrollment of people of color doubled with the total participants of color representing more than 50 percent of the total in the study.

MDMA-AT has not been approved by any regulatory agency. The safety and efficacy of MDMA-AT have not been established for the treatment of PTSD.