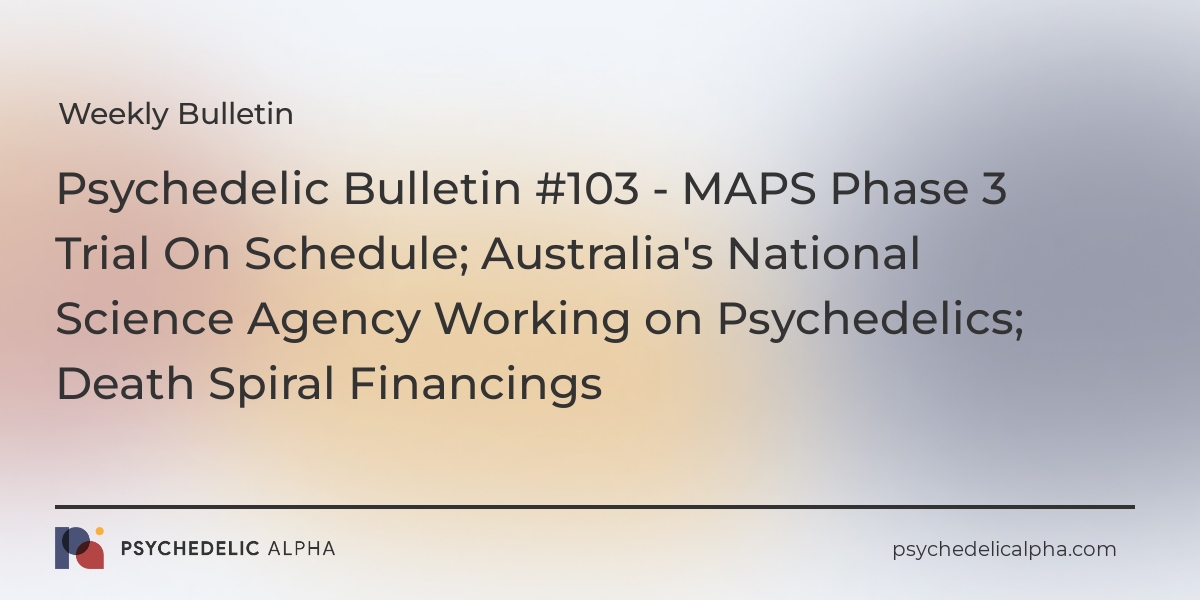 MAPS’ second Phase 3 trial of MDMA-assisted therapy (MDMA-AT) for PTSD is right on schedule, according to the non-profit.

The trial is now fully enrolled across 13 sites in the U.S. and Israel, with the group reporting that interim analysis has confirmed “no changes to the planned sample size are necessary to provide sufficient statistical power to detect efficacy of MDMA-assisted therapy for [PTSD].”

If all else goes to plan, MAPS hopes to submit a New Drug Application to the FDA in H2 2023. See the clinical trial record for more information: NCT04077437.

Australia’s Commonwealth Scientific and Industrial Research Organisation (CSIRO, not to be confused with Cisco – seriously, the logos look similar too) has announced that it is “aiming to develop new psychedelics to help people with a variety of mental health issues including depression, addiction, end of life anxiety and post-traumatic stress disorder.”

The agency will work with Australian companies to “improve existing psychedelic products and develop new ones,” including working on the manufacturing processes for up to 15 psychedelic compounds.

One of the first local companies to work on this new project is Natural MedTech, which also secured funding via another of the agency’s programs.

Note that just over a year ago CSIRO made a similar move in an attempt to support its domestic cannabis industry. In February 2021, the agency announced it had secured a licence (a “licence to chill”, as they called it in a blog post discussing the development) to develop medicinal cannabis products.

That cannabis work was housed in the agency’s Botanical Extracts Lab. This new psychedelics research and industry engagement track, meanwhile, appears to have a key focus on synthetics and new drugs.

Specific details surrounding the program remain limited. It would be interesting to see whether they embed the track within other initiatives housed at CSIRO, such as the indegenous science and knowledge research track.

This isn’t the first positive move by the Australian government and its agencies. As we explained in our 2021 Year in Review, despite the Therapeutic Goods Administration rejecting calls to reschedule psilocybin and MDMA, the federal government carved out $15m for psychedelics research. At the time we noted:

“This capital injection into psychedelic research was welcomed by researchers. Beyond its cash value, it sends a strong message that Australia is open for psychedelics research.”

So, who else is working on psychedelics in Australia? Here are a few examples:

A group of psychedelics researchers, investors, entrepreneurs and others involved in the space are today kicking-off the agenda at the Medical Psychedelics House of Davos, hoping to bend the ear of those attending (or, milling around) the World Economic Forum’s (WEF) annual gathering.

The house, which is hosted by Energia Holdings, will provide a week-long series of talks and panels from the likes of David Nichols, Rachel Yehuda and Amanda Feilding. Here’s the full program.

The speaker line-up is refreshingly diverse… it’s not all “Davos Men.”

Psychedelics company Silo Wellness was about to go bust, but just over a month ago Alpha Blue Ocean committed CAD ~$6m to keep the company going.

Alpha Blue Ocean explains that it’s a provider of “alternative financing solutions,” having executed over 80 transactions with financial engagements of more than EUR 1.5bn since inception.

Phew, right? Well, not so fast.

The terms of the financing commitment are not for the faint-hearted. The terms resemble what are sometimes dubbed ‘death spiral’ financings, which allow the company to raise money at the expense of other shareholders.

No surprise, then, that the stock price is down 95% since last year.

Distressed financings like these were common in the cannabis space as companies ran out of cash. The emergence of deals like these in the psychedelics space should serve as a warning to investors and other stakeholders in companies with short cash runways, especially companies with tiny market caps like Silo.

What is Silo Wellness up to, anyway? It claims to be working across a number of business units: from a psilocybin nasal spray to functional mushrooms and retreats.

The company recently terminated a couple of deals, too. It had hoped to licence its psilocybin nasal spray in Columbia and Brazil via a deal with Jungle Med Inc., but the LOI was mutually cancelled.

A “strategic equity investment” of $495,000 that was announced in February was also terminated. It would have seen Orthogonal Thinker’s David Nikzad and Jason Hobson appointed as co-CEO and COO of Silo, respectively.

It seemed there were at least some synergies between Orthogonal and Silo: both are throwing buzzwords at the wall (or, cash at ‘disruptive’ ideas) and seeing what sticks: from ‘Happy Sexy’ weight-loss supplements to metaverse ads.

One example: psychedelics X the metaverse. On February 11th, Silo Wellness’ functional mushroom brand Marley One sponsored a metaverse concert headlined by Outkast’s Big Boi. Orthogonal Thinker, meanwhile, purchased a 12×12 patch of land in the Sandbox metaverse in a transaction valued at $2.2m at the time (it looks like they bought the top: the value of the ‘land’ has dropped precipitously since then).

Inside the Dispute Over a High-Profile Psychedelic Study

“A recent paper offered a theory on how psilocybin works to treat depression. Before long, there were memes and accusations of unprofessionalism.”

Shayla Love’s latest for VICE explains that Twitter spat surrounding a high-profile psychedelic study. Even if you’re not interested in the drama, you’re likely to learn something about statistics.

In a way similar to the novels of Orwell and Ballard, OK Computer appeared to have prophetic qualities across music, science and politics.

The album served as a jarring counterpoint to D:Ream’s Things Can Only Get Better, which became the ‘ring walk’ song of Tony Blair’s New Labour government (Radiohead released the album shortly after Blair took the helm).

I could digress for hours on this period of politics and culture, but there’s a reason we felt readers may enjoy this show in particular. At one point, journalist John Harris discusses that famed line from Karma Police:

For a minute there, I lost myself

It’s Harris’ favourite line on the record, he goes on to explain. And, he’s not alone; people love this line. He recalls the band’s performance at Glastonbury in 2003: the band stopped but the 200,000 person crowd carried on singing that line back to them. Harris suggests the reason for that “might be simpler than you think.”

“We all chase losing the sense of ourselves for however brief a moment, and a lot of the time music is what delivers that. And, they acknowledge it. It’s almost like they wanna forget being Radiohead, the same way that when I watch a group I wanna forget who I am for 5 or 10 minutes.”