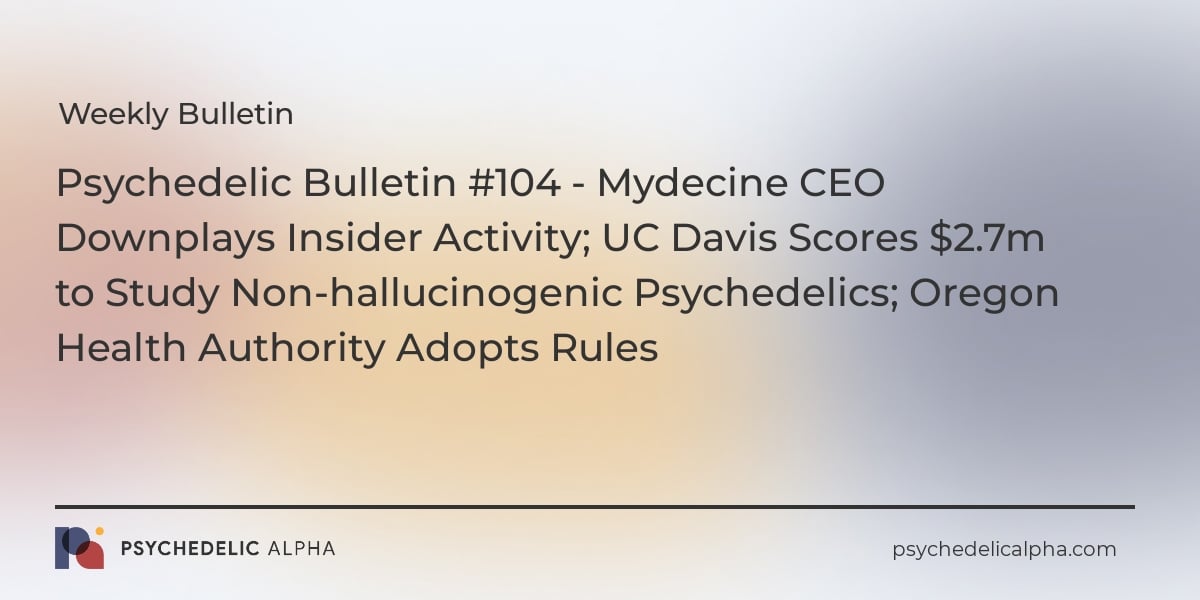 On Tuesday, Mydecine’s CEO, David Joshua Bartch (who generally goes by ‘Josh Bartch’), filed more than 10 insider transaction notices, the earliest of which refers to a transaction that occurred in February 2020: over two years ago.

The number of shares involved in these transactions is by no means insignificant, with one filing showing a May 2021 private transfer of 10,000,000 shares from Bartch to an unknown counterparty. In November 2021, Bartch received over 5 million shares as compensation.

We asked Bartch about these transactions, which were reported incredibly late. Bartch confirmed that “these are NOT sales of stock but private transfers,” to which he “did not receive proceeds” (emphasis his own).

Bartch went on to explain that he has “made zero public market stock sales,” and that he has “no intention of doing so in the near term.”

Still, the unexplained and large transfer of shares is odd, and warrants scrutiny; especially given that incredibly late insider filings. We asked Bartch to provide more information, such as disclosing the counterparty or the purpose of the transfer, but the CEO refused to provide further comment.

“I will be doing a few interviews in the near future addressing this, Bartch told us. He said that he also intends to clarify “the reasoning for the reverse split, several very positive company updates and the numerous false statements circulated in chat rooms.”

Today, the company announced the closing of a $2.8m public offering, paying a 7% commission to agents. The company is running on fumes, with a monthly burn of $1.6m according to accounts for the quarter ended March 31. During that quarter, the company spent $2m on salaries and consulting fees.

David Olson, founder of Delix Therapeutics, is heading-up the work. Talking about these non-hallucinogenic psychedelic analogs (or, ‘psychoplastogens’, as he prefers to call them) Olson said that the grant “will help us to understand the basic mechanisms by which these compounds impact addiction, and hopefully develop more effective and better tolerated treatments.”

The press release from UC Davis makes it clear that Delix is not involved in this project.

Last Friday, the Oregon Health Authority (OHA) released a set of rules that will govern products, testing and training programs for the state’s therapeutic psilocybin program set to launch next January.

Given the adoption of these rules, Oregon Psilocybin Services should be in a position to begin accepting training program applications from June. As noted previously, rules governing products and manufacturing stipulate that only one species of mushroom is permitted, Psilocybe cubensis.

The remainder of the rules will be considered in autumn and adopted by the end of the calendar year.

Yesterday, the Advisory Board rejected a set of recommendations regarding “Privileges and Duties of Entheogenic Practitioners,” which sought to provide protections for the religious use of psilocybin. The protections and considerations would effectively have created a separate category of licensure, with lesser standards.

The Advisory Board had initially supported such protections, but on Wednesday Oregon’s Department of Justice issued a legal opinion stating clearly that the OHA has “no statutory authority… to exempt anyone engaged in the manufacturing, delivery or possession of psilocybin from licensure and licensure is the only mechanism for being exempt from state criminal liability.” You can read the full set of responses here.

This week, Business Insider looked at the 15 highest-paid CEOs in biopharma.

The list included atai Life Sciences’ Florian Brand. According to Insider, Brand’s 2021 pay package was $26.5m which includes “$21 million in stock awards and $4.6 million in options”.

Stanford’s Boris Heifets is giving a free webinar on June 22nd that will cover:

From the patent on using LSD to treat food allergies to Compass’s attempt to patent psilocybin use and “soft furniture,” last week’s publication of the patent application entitled “Treatment of Anxiety and Depression” or the “NYU Application” officially marks a new race to the psychedelic patent bottom.

Psychedelic Alpha Editor-at-Large Graham Pechenik caught wind of this patent application the day it published and Tweeted about the development:

What if patents blocked cancer patients from using psilocybin too?