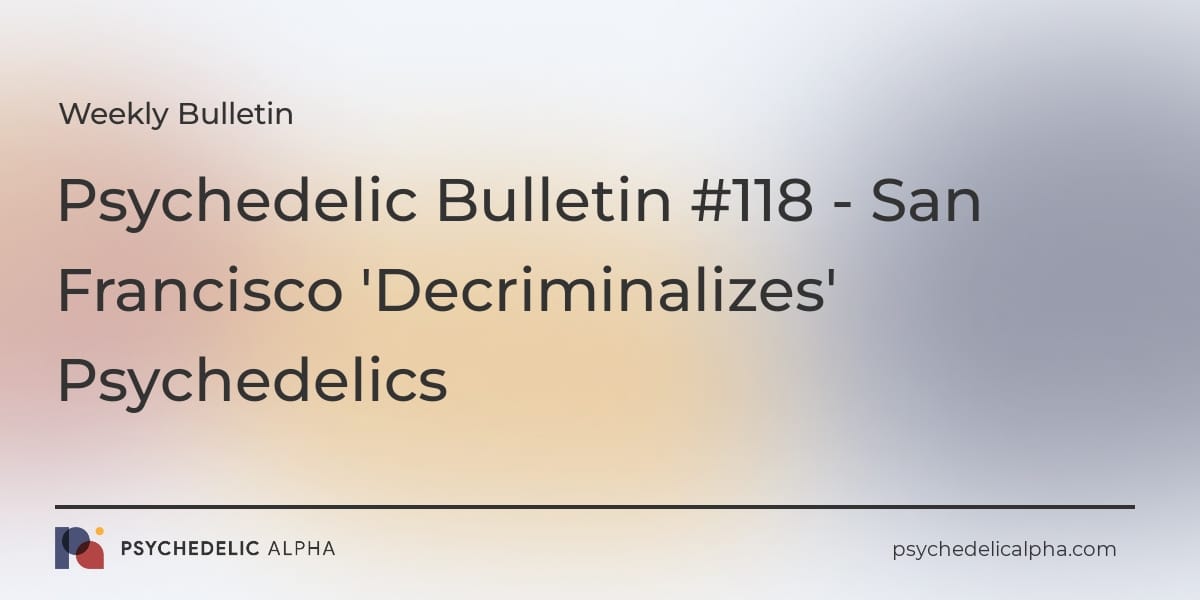 This week’s Bulletin is shorter than usual…

“Decriminalization” is a term that describes a variety of initiatives, and as such frequently entices pedants out of the woodwork. However, there is some reason to be concerned around sloppy reporting on psychedelic drug policy reforms.

This headline from NowThis News (part of the Vox Media group) is particularly misleading: ‘Shrooms are now officially legal in San Francisco’. Decriminalization does not equate to legalisation, with the former generally meaning that those using psychedelics will not be investigated, arrested or prosecuted and the latter referring to the establishment of a legal framework for psychedelics, which would almost certainly happen at the state level (as in Oregon).

Now, imagine that someone reads this headline on NowThis, which is geared toward bite-sized social media glances, and then runs afoul of the law by openly selling psychedelics, for example. The distinction is not exclusively the remit of armchair linguists, then.

“Deprioritization” is, arguably, a better term to use when referring to local reforms that seek to make the investigation, arrest and prosecution of personal possession and use of psychedelics (and other substances, of course) the lowest law enforcement priority. The ‘weakest’ manifestation of such initiatives sees lawmakers ‘urge’ law enforcement officers to deprioritize enforcement (as in SF), while ‘stronger’ deprioritization resolutions might scrap funding for such enforcement efforts.

Anyhow, the resolution (which was passed unanimously) urges the Mayor of the City and County of San Francisco to instruct state and federal lobbyists to support the decriminalization of all “Entheogenic Plants and plant-based compounds that are listed on the Federal Controlled Substances Schedule 1”. It is further resolved that the Board of Supervisors urges local law enforcement agencies to make the investigation and arrest of individuals engaged in the adult use, cultivation, purchasing, transporting, and distributing of such substances among the lowest priority for the City.

The also urges state and federal officials to “work in collaboration” to support decriminalization at a broader level.

Minority Trip Report (MTR) is a podcast for under represented views and life journeys with mental health, psychedelics, and consciousness.

Available via Apple Podcasts and Spotify. More info on their website.