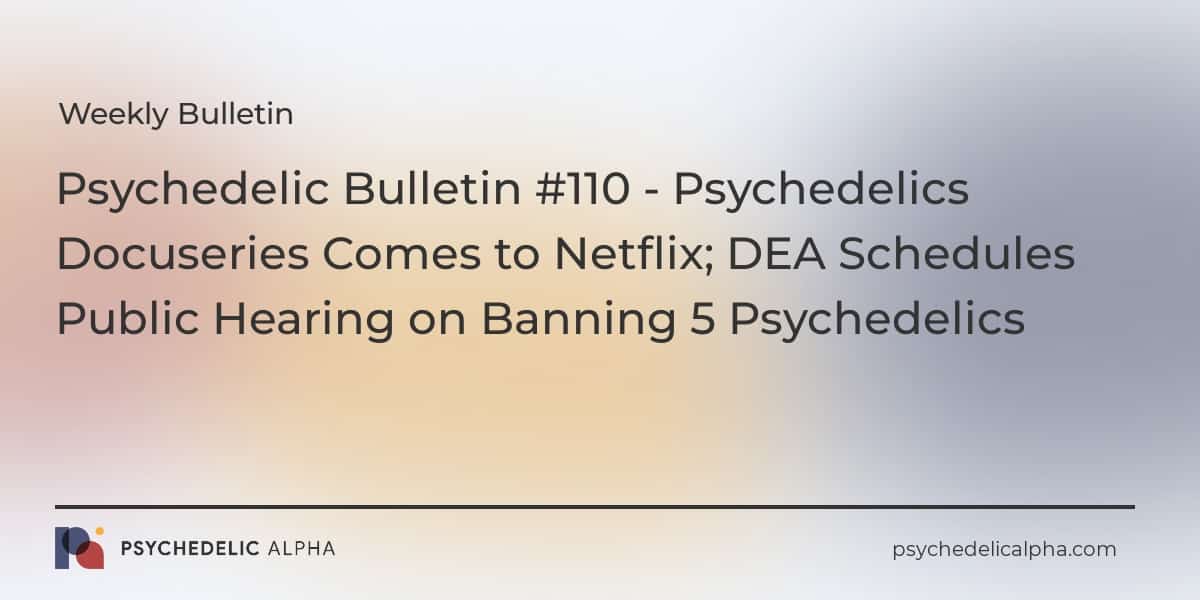 Ann Shulgin, who Erowid describe as “psychedelic author, lay-therapist, lecturer, and friend”, passed away this weekend at the age of 91.

Hamilton Morris wrote on Twitter: “Ann Shulgin died this morning at the age of 91. Her writing made PiHKAL and TiHKAL more than books about chemistry and psychopharmacology, she made them into great love stories. I know that she believed consciousness survives death, I hope she’s right and rejoining Sasha.” Many others took to the platform to share memories of their time with the Shulgins.

Connie Littlefield’s documentary about Sasha and Ann Shulgin, Better Living Through Chemistry, is a tribute to the couple’s impact on the lives of so many. Readers might consider subscribing for updates on the film’s webpage to make sure they can attend a future screening.

The Netflix adaptation of Michael Pollan’s immensely popular book, How to Change Your Mind, comes to Netflix tomorrow (12th July).

We’re expecting to see a significant uptick in interest around psychedelic therapy in response to the series.

As reported by Kyle Jaeger in Filter, the DEA has set a public hearing for August 22nd, during which any person who can demonstrate they would be “adversely affected or aggrieved” by the proposed scheduling of five tryptamines can ask to testify.

While opponents of the DEA’s proposed ban hope the judge will recommend a lower schedule (or none at all) for the five psychedelics, Jaeger points out that the DEA is not bound by the judge’s recommendation: in fact, there’s precedent for it being ignored in similar cases.

Chacruna published a provocative article earlier this month that takes aim at groups like Decriminalize Nature’s lack of consultation with indigenous groups on the topic of peyote decriminalisation.

“While decriminalization is not legalization, it introduces new and unpredictable factors that could have significant ecological consequences for peyote, as well as potentially disrupting access to this sacred resource by communities and families who have prayed together with this medicine for generations. The reality is that there is no clear benefit to Native communities if peyote is decriminalized; rather, decriminalization can be seen as a Pandora’s box that, once opened, cannot be closed again. It should be left to the Native American Church to decide if, and when, and under what circumstances this box should be opened.”

We have written on this topic a number of times (see below), but never in the detail that Labate and Feeney provide in this lengthy piece – it’s certainly a thought-provoking piece that should remind us just how nuanced any dismantling of the War on Drugs must be.

The matter was also covered in a review of the forthcoming Netflix docuseries mentioned above. Bob Strauss’ review of How to Change Your Mind notes that:

“[Decriminalize Nature] has created one interesting political wrinkle that doesn’t involve reactionary laws. Native Americans have taken issue with peyote, the rare mescaline-producing cactus that grows only along a stretch of the Rio Grande, being included in the plant decriminalization effort. They rightly (not to mention historically) fear it will lead to a surge in non-Natives poaching the medicine that’s crucial to tribal ceremonies and individuals’ health.”

Pollan responds to this during the series by proclaiming that, “respecting Native American culture means leaving peyote alone.”