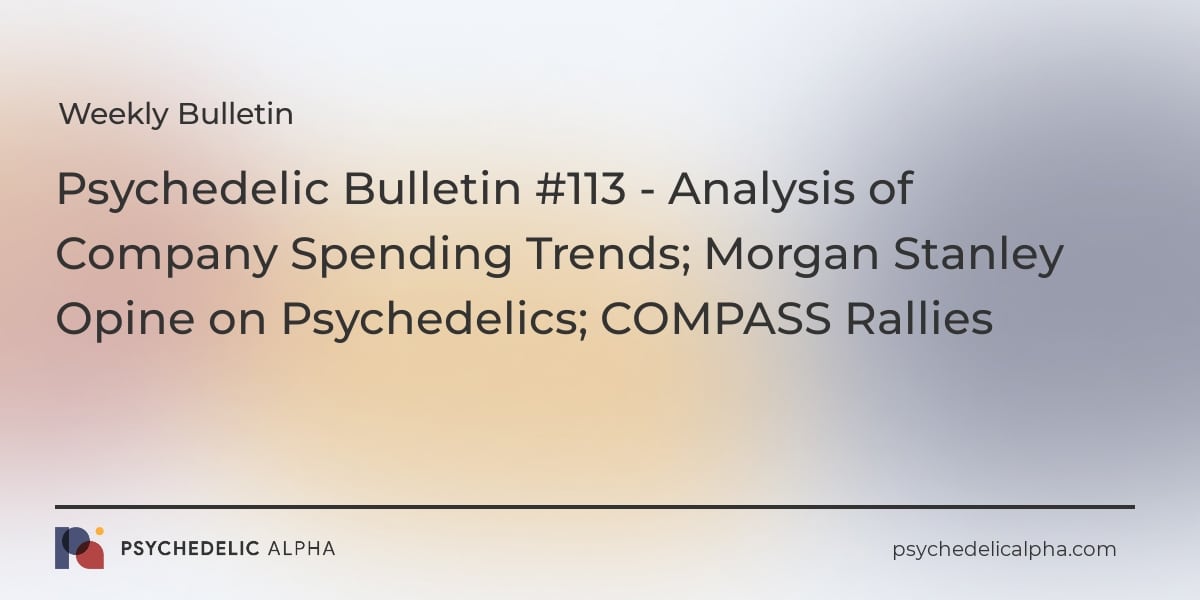 Analysis: Smaller Psychedelics Companies Cut Back on Spend, While Larger Ones Double Down

We have repeatedly reported on the cash-strapped nature of an increasing portion of psychedelics companies. Investors are concerned about it, too, according to our Psychedelic Investor Pulse Survey published last month.

Limitations of our analysis include the small sample of companies included, as well as the quirks and idiosyncrasies of accounting practices and structures across companies. Given the lagging nature of public company filings, ‘Q8’ generally represents accounts made up to spring 2022.

Nonetheless, a strong trend is visible in the below chart: 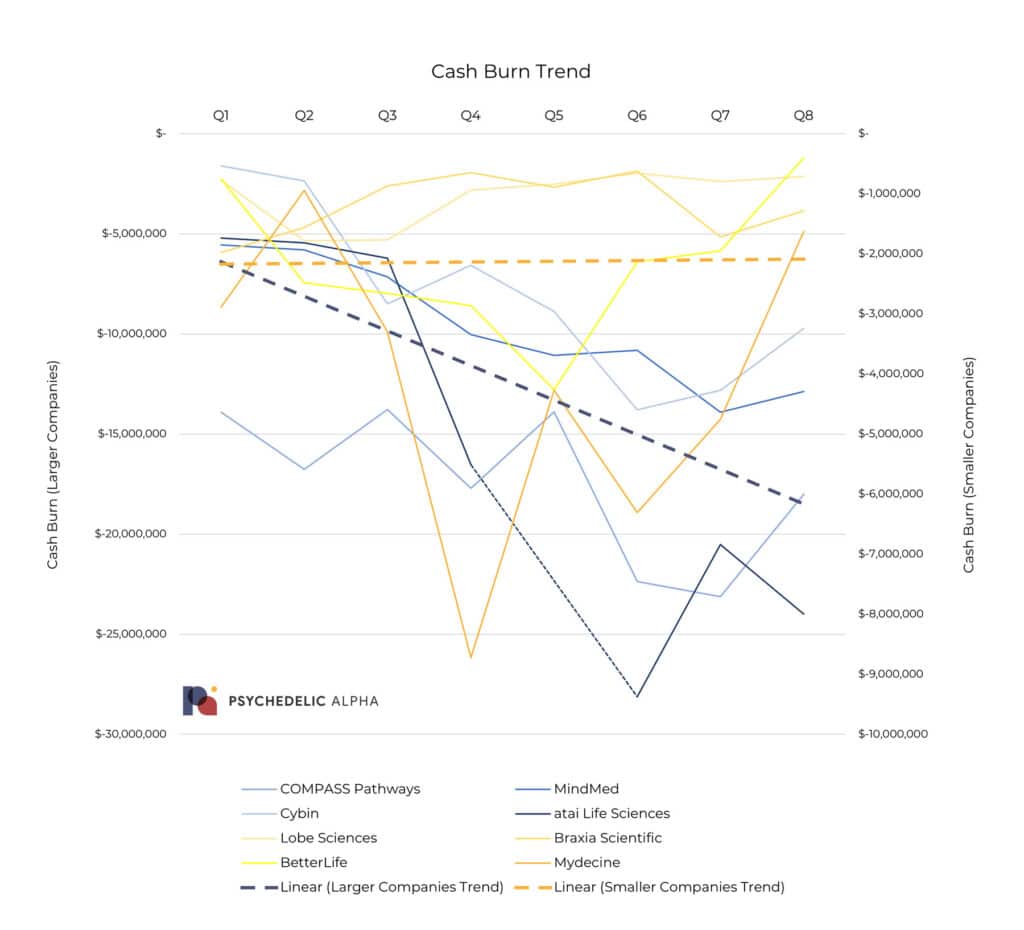 The trend is clear: over the past 8 quarters larger psychedelics companies have generally increased the amount of cash spent on operating activities, while smaller companies have been reigning-in such spend.

Mydecine is perhaps the most dramatic example among the companies with a ‘smaller’ cash burn (especially today), with the trend representing a U-shaped curve (or, a ‘W’). MindMed, meanwhile, is emblematic of the trend among larger psychedelics companies: a downward slope representing increasing amounts of cash being spent per quarter, over time.

If we plot the average quarterly cash spend on operating activities for the smaller and larger company groups, the chronology of this trend is more pronounced: 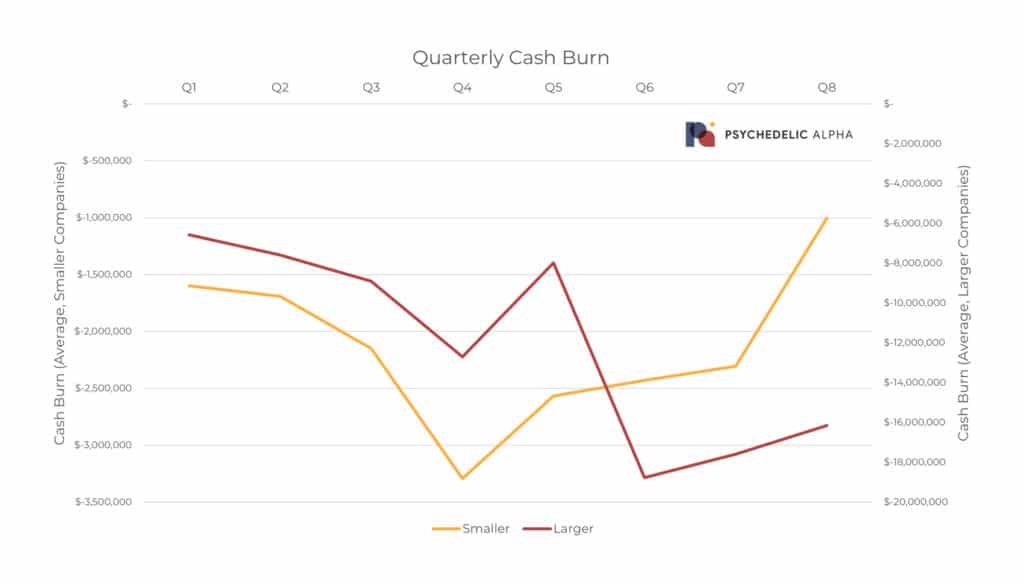 According to this chart, Q4-Q5 (Spring-Summer 2021) represents something of an inflection point. Smaller companies began reducing cash spend on operating activities, while larger companies such as atai, COMPASS and Cybin increased their quarterly spend as they progressed through drug development milestones.

The fact that smaller public psychedelic companies, many of which will soon be forced to identify new sources of funds, are reducing cash burn is unsurprising: both from an existential and an optics standpoint. But, this surely raises the question of just how such companies plan to deliver on the drug development goals that many had planned, ant that are oh-so expensive.

At the top of the week we were first to cover a report from Morgan Stanley’s Counterpoint Global team, which identified psychedelics as having the potential to “fundamentally reshape how we think about and treat not only mental illness but a host of other conditions as well.”

Among the challenges the report identified (from an investment perspective) was that of decriminalisation. Though the reasoning for identifying this as a ‘challenge’ was not expanded upon, the analysts were presumably referring to the potential of such efforts to encroach on any future medical market. This highlights an apparent tension between efforts to decriminalise and legalise psychedelics, and those that seek to house them within a commercialised medical model.

Our coverage of the report concluded, “In sum, this is a very optimistic note from Morgan Stanley’s disruption forecasting team… perhaps even too optimistic!” Read our summary, and access the PDF report, here.

COMPASS Pathways shares are up 64% month-on-month, with a flurry of positive developments buoying investors in the company. Some of these catalysts were discussed in the company’s Q2 2022 financial results and business highlights, released on Wednesday. Let’s briefly explore some of the developments discussed here, and on the earnings call. 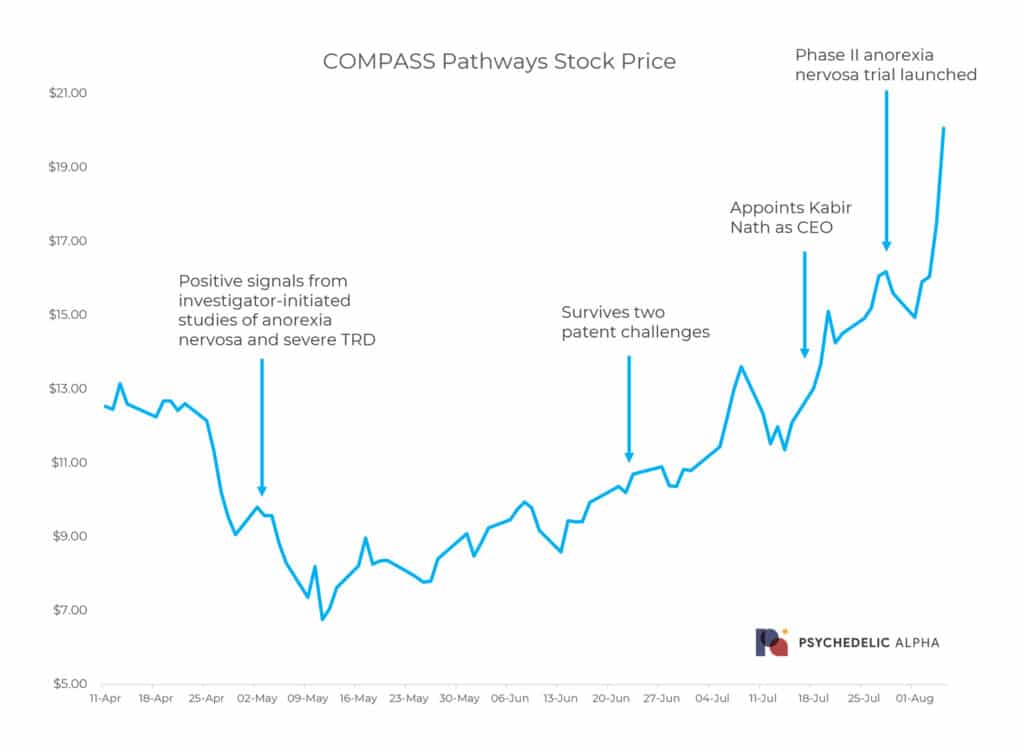 As we covered last month, COMPASS has appointed former Otsuka Pharmaceutical exec Kabir Nath as CEO, replacing George Goldsmith. This was met with an apparent vote of confidence by investors, and demonstrates further osmosis of human capital from conventional pharmaceutical companies into psychedelic outfits.

In terms of the company’s Phase 3 trial, protocols have been submitted and are currently under review by the FDA. The Phase 3 program design includes two pivotal trials, which is customary for similar indications (though, the portion of new drugs and biologics approved by the FDA using 2 pivotal trials has declined from 81% in 195 to 53% in 2017 according to Zhang et al., 2020). COMPASS believes it remains on track to commence the Phase 3 program this year.

The trials are set to be augmented significantly by digital tools that will be employed across the therapist and patient life-cycle. We expect COMPASS to attempt to leverage digital tools in the preparation stage of the patient life-cycle, but will await further details before speculating too heavily (we do know, however, that COMPASS will employ its My Pathfinder app for the first time in its Phase 2 anorexia nervosa study, discussed below).

On the quarterly update call, Goldsmith explained that further details of the Phase 3 program will be shared on the company’s Investor Day on October 12th; pending FDA sign-off by then.

Meanwhile, other indications abound. A transatlantic Phase 2 study of COMP360 psilocybin therapy for anorexia nervosa has been launched and is distributed across a number of research institutes. The program, which we covered briefly in May (Bulletin #101), is informed by an investigator-initiated study by Dr. Walter Kaye at UC San Diego; indicative of COMPASS’ decentralised approach to identifying new indications to pursue.

In this paradigm, COMPASS finances or otherwise supports (at a minimum, the company provides its COMP360, though investigators are on the hook for shipping costs!) signal-generating, exploratory studies of COMP360 psilocybin for indications characterised by some level of unmet need.

We understand that COMPASS has a dozen of these investigator-initiated studies that are ongoing or have been completed for the same number of indications, which beyond anorexia nervosa include bipolar disorder II, chronic cluster headache and suicidal ideation.

What’s in it for COMPASS, beyond signal-generating data? Well, they own (or have a licence to) any resulting IP generated by such studies.

Next Week: A Decisive One for California’s Decrim. Bill

SB-519, which would decriminalise possession and use of psychedelics in California, will face its final committee hurdle next week. Lobbyists arrived at the Capitol this week, hoping to encourage support for the Bill ahead of its Thursday 11th August hearing at the Assembly Appropriations Committee.

UC Berkeley’s The Microdose newsletter published an interview with Senator Wiener earlier this week in which he explains the difference between decriminalisation (as envisioned under SB-519) and other efforts such as legalisation: it’s well worth a read.

Elsewhere, the Sacramento Bee shared a 50-minute long Q&A video with Senator Wiener and its editorial board. The board is supporting the bill, as explained in an editorial titled, “Psychedelic drugs hurt few and could help many. California must decriminalise them,” the board