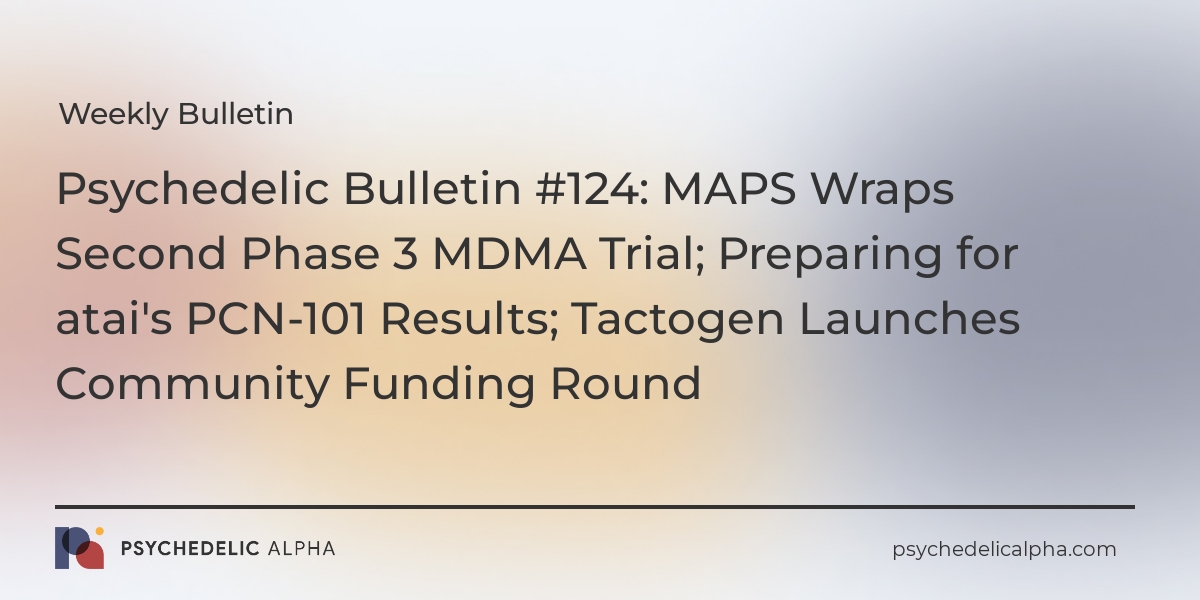 MAPS PBC has completed its second Phase 3 study of MDMA-Assisted Therapy (MDMA-AT) for PTSD, with the final participant visit of its MAPP2 trial having taken place. We broke the news via Twitter last week, but today the organisation has shared a press release with further details.

Our reporting was based on monitoring of clinical trials registries, which showed that the study had been completed slightly ahead of schedule, with a primary and secondary completion originally slated for December 12th 2022 and March 5th 2023, respectively. The trial also appeared to over-enrol slightly, with 121 patients vs. the originally-anticipated 100.

The company expects to have top-line data in the first quarter of 2023, which will inform a New Drug Application (NDA) submission to the FDA as early as Q3 2023. Generally, FDA’s review teams aim to take 6 to 10 months to make a decision on whether to approve an NDA, assuming the package is complete. While MDMA-AT will benefit from its Breakthrough Therapy Designation, it’s also a new molecular entity to the FDA which entails a slightly longer process (usually tagging on two months to the timeline). It’s also likely that MDMA-AT will be subject to Risk Evaluation and Mitigation Strategies (REMS), which will take time to devise and implement.

MAPP2’s protocol was very similar to MAPP1, the company’s first Phase 3 trial. A key difference, however, was the enrollment of patients with moderate PTSD alongside those suffering a severe diagnosis. MAPP1, meanwhile, only enrolled those with a severe PTSD diagnosis. MAPP2 was also more representative, with people of colour representing more than half of those in the study.

“This has been a decades-long journey”, said CEO Amy Emerson, who started as a pro bono consultant to the nonprofit MAPS nearly 20 years ago back in 2003.

Racing Beyond Racemic: A Look at Ketamine Drug Development Ahead of atai’s PCN-101 Phase 2a Readout

In our latest Deep Dive, Psychedelic Alpha’s Noah Smith zooms out to explore the history of ketamine’s development in psychiatry, background on R-Ketamine’s R&D, and today’s landscape. He also shares some guidance on what to look for in the upcoming readout.

Of course, we will provide snap analysis of the PCN-101 Phase 2a readout when it’s made available. The company’s stock (NASDAQ: ATAI) was up 10% on Friday.

Earlier this week, psychedelic drug developer Tactogen announced the launch of its Community Stakeholder Initiative, which allows the public to purchase an equity stake in the company.

Tactogen, a Public Benefit Corporation (PBC) which is focused on the discovery and development of entactogens, has raised $6.2 million since early 2020 by more conventional means like VC investment. Now, it’s opened a fundraising opportunity with a much lower barrier to entry: $100.

Given the capital-intensive nature of this segment (Tactogen anticipates raising over $200 million in the next decade), CEO Matthew Baggott is clear that this initiative is not primarily motivated by raising funds. “This is less about raising money, and more about being open to and inclusive of everyone in the psychedelic ecosystem”, he said.

Investors in this vehicle will be represented by lead investor Victoria Hale, a name that will be well-known to many of you. Hale has founded two non-profit pharmaceutical companies and was formerly Chair of the Board for MAPS, among many other posts. “Tactogen has a deep appreciation for the role of community and connection in healing and wellness”, she commented in a company announcement.

To our knowledge, this crowdfund makes Tactogen the first psychedelic drug developer to allow non-accredited investors to participate in a private round. Usually, investors must be accredited, with minimum ticket sizes well into five figures.

You can learn more about the raise via the company’s Wefunder page, and a Town Hall session with Victoria Hale and the Tactogen team (1 hour video).

The National Institute for Health and Care Excellence (NICE) is an important gatekeeper for drug developers looking to enter the UK market: it decides which medicines get covered by the country’s National Health Service (NHS).

Given psychedelic-assisted therapy’s unusual (and labour-intensive) protocol, it’s hard for health economists to find comps. The case of Spravato, however, might serve as a cautionary tale.

Having been rejected by NICE for a third time, the manufacturer (Janssen) and Royal College of Psychiatrists appealed the decision. In its response to the appeal, NICE doubled down on its critiques of the company’s economic modelling. The agency took issue with the short duration of trials, the patient populations who were (or were not) included in the studies, Janssen’s underestimation of costs associated with implementation, inclusion of indirect costs in economic modelling, and other elements of Janssen’s submissions.

We believe this is an important saga for psychedelic drug developers to follow closely. Read our Editor Josh Hardman’s Twitter thread on the topic for the specifics.

Browse more roles and get more job posts to your inbox by signing up for alerts here. Make an account to join our free talent pool, too. 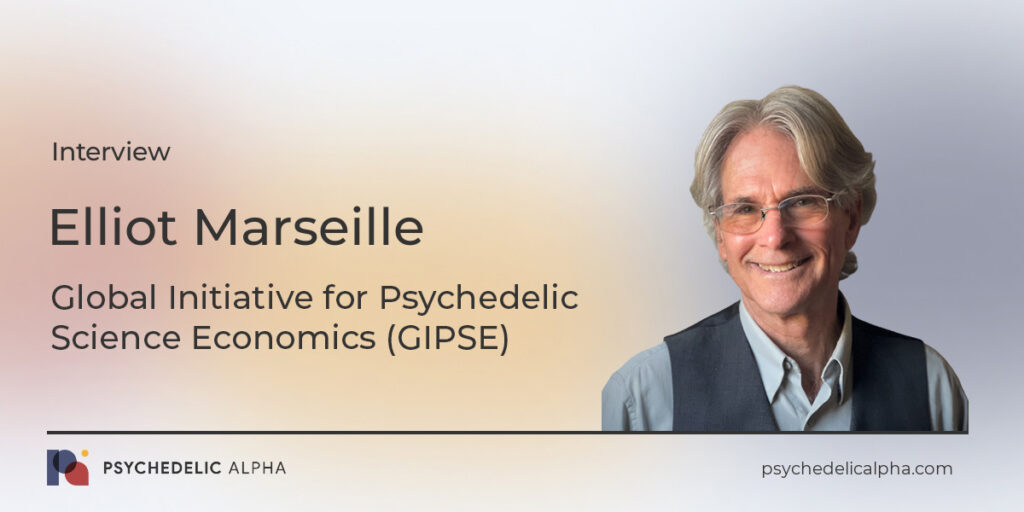 In his position as Director of the Global Initiative for Psychedelic Science Economics (GIPSE), Marseille is preparing for the next major hurdle that psychedelic therapies will need to avoid tripping over: demonstrating cost effectiveness.

We sat down with Marseille to discuss the importance of the health economist’s toolkit and contributions in these considerations, as well as some of the ethical and practical challenges that arise from this work.

“That’s why I look a bit baffled when the camera cuts back to my face”, Nichols said in reply to a tweet. She was clearly disappointed by the lack of subject matter expertise on display from the other bench; audibly uttering, “no it isn’t” during the session. The MP explained that she has sent him “a proper briefing” alongside a meeting request.

84 Years Since Hofmann’s First Synthesis of LSD  |  In a 1996 talk on his discovery, he pondered “what roles planning and chance play in the realization of the most important events in our lives.” On his discovery of LSD, more specifically, he wondered: “just how much was destiny, how much free will?”

In a 1996 talk on his discovery, he pondered "what roles planning and chance play in the realization of the most important events in our lives."

On his discovery of LSD: "just how much was destiny, how much free will?" pic.twitter.com/xCeexWzOuZ

TL;DR: In animal studies, NIMH prioritises the reverse translational approach. i.e., it’s interested in research that will seek mechanisms of action based on observations in humans. On the translational/clinical side of things, NIMH identifies a number of methodological issues that should be addressed in any study designs or grant applications.

Read a thread from Josh Hardman breaking down the guidance.

The Ethics of Skipping the Trip |  A journal article from David Yaden, Brian Earp and Roland Griffiths explains that the authors are “broadly supportive” of efforts to produce non-hallucinogenic (or, “nonsubjective”, in their words) psychedelics, but argue that classic psychedelics should be “considered the default and standard of care.”

Here, Yaden et al. are making an ethical argument, which essentially hinges on the argument that to prescribe a “nonsubjective” by default is to potentially withhold “typically positive, meaningful, and therapeutic experiences” from most patients. As such, the authors argue that people should be at least offered classic psychedelics as the default treatment option (for those who aren’t contraindicated), while also allowing patients to choose the non-hallucinogenic option if they prefer.

COMPASS’ Published Results Take its Psilocybin into Final Phase of Clinical Trials  |  This week, Josh wrote a piece on COMPASS Pathways’ Phase 2b publication and Phase 3 program in Lucid News. It draws focus on the company’s digital tools.

Latest Filings Show Just CAD $89k Cash on Hand at Mydecine  |  CEO and COO remuneration was still at around $277k for the 9mo period (c.$370k per annum), while $467k was spent on research in the most recent quarter.

Finland Gives Go-Ahead to Psilocybin for Alcohol Use Disorder Study  |  Canadian psychedelic drug developer Clairvoyant Therapeutic has received permission from the Finnish Medicines Agency to commence a trial of 160 participants, 50 of whom will be Finnish.