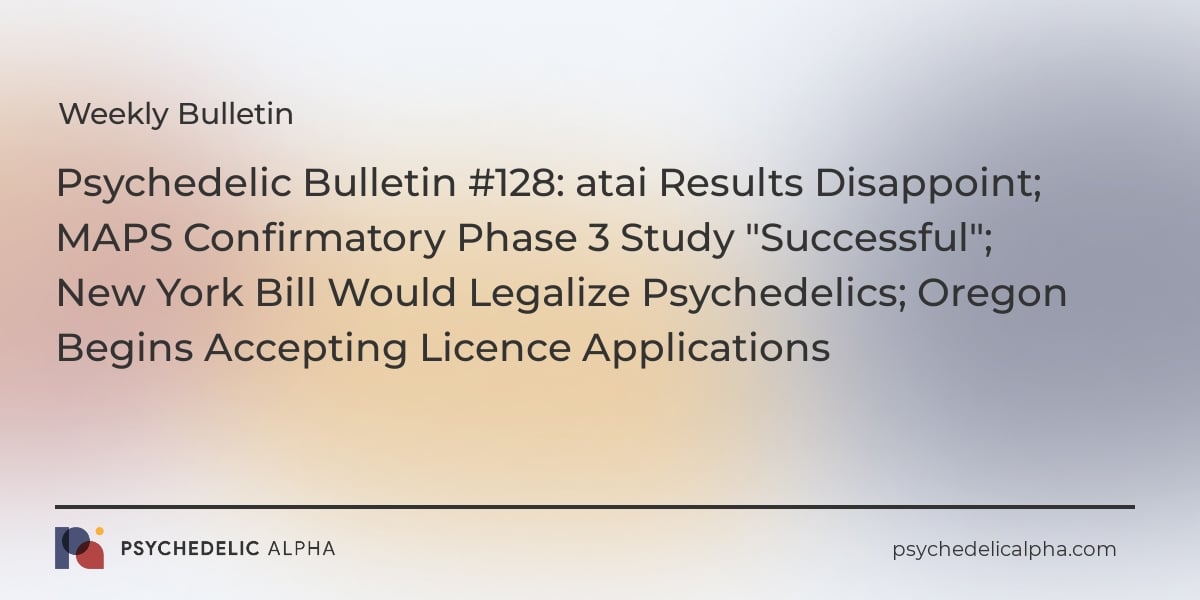 We’re currently working on our Year in Review, which we will begin publishing in segments later this month. In the meantime, our Bulletins will be a little shorter than usual.

Yesterday, atai Life Sciences published a heavily anticipated press release discussing the high-level outcomes of its Phase 2a study of PCN-101 (R-ketamine). The proof-of-concept trial, which officially wrapped up on November 10th, 2022, was expected to be a significant step in atai’s effort to develop a new, effective, and accessible treatment option for treatment-resistant depression (TRD).

However, it wasn’t the rosy picture atai investors had been hoping for. In the press release, atai explained that PCN-101 “demonstrated signals of efficacy across all timepoints out to two weeks”, but that the candidate, “did not meet its primary endpoint of a statistically significant change from baseline in participants’ MADRS (Montgomery-Åsberg Depression Rating Scale) score at 24 hours compared to placebo.”

Key secondary endpoints included a proportion of patients defined as responders, meaning patients who experienced 50% improvement from baseline in MADRS, and a proportion of patients in remission, defined as a total MADRS score of less than 10. Despite seeing greater response and remission rates in the 60mg arm, the trial did not meet statistical significance at any timepoint on these secondary measures.

In more positive news, the company announced that PCN-101 was generally well-tolerated, with “rates of sedation and dissociation comparable to placebo.” That will be little consolation, though, given the missed primary endpoint.

The path ahead for the candidate is unclear, with the company ending its press release with the following:

atai will further evaluate the PCN-101 data in more detail over the next weeks and will work with its subsidiary Perception Neuroscience to explore next steps, including but not limited to seeking strategic partnership options.

After months of anticipation surrounding this readout, the poor results caused a sharp reaction on the markets. ATAI closed at $1.82 on Friday 6th January, down over 30% from the previous day and 91% from its $21.00 at market open back in June 2021, when it IPOd on Nasdaq.

This price movement wiped around $150m off the company’s market cap, meaning COMPASS Pathways is now slightly larger. With a market cap of around $300m, atai is trading just above the value of its cash on hand (and remember, atai owns a chunk of COMPASS, too).

Analysts are reigning in rich price targets, with Citi halving its target to $10 and EF Hutton reducing its target by over a third ($23.00 down to $15.00). These 35-50% adjustments to price targets hint at the composition of financial models used to value the company. While these vary between banks and analysts, it’s clear that PCN-101 was occupying a significant portion of the revenue forecast in these models; which is unsurprising given that it’s one of atai’s most mature candidates with a large addressable market.

This news comes less than a month after atai’s deuterated mitragynine derivative, KUR-101, provided lacklustre results in a Phase 1 trial. If we had more time on our hands, we would be doing a deep dive into atai’s pipeline to contextualise yesterday’s news.

MAPS’ Second Phase 3 Trial of MDMA for PTSD is “Successful”

On Thursday, MAPS announced that its second Phase 3 trial of MDMA-assisted therapy (MDMA-AT) for PTSD confirms prior positive results. According to a MAPS representative, this should be taken to mean that MAPP2, like MAPP1, achieved a statistically significant primary endpoint.

Data from the 104-participant trial is expected to be published in a peer-reviewed journal later this year.

MAPS founder and Executive Director Rick Doblin commented on the 37 year journey that has led to this moment, noting that the “impossible became possible through the bravery of clinical trial participants, the compassion of mental health practitioners, and the generosity of thousands of donors.”

Now, the nonprofit’s wholly-owned subsidiary, MAPS PBC, is tasked with the submission of a New Drug Application and the ensuing commercialisation process, should it achieve approval.

Browse more roles and get more job posts to your inbox by signing up for alerts here. Make an account to join our free talent pool, too.

New York Bill Would Legalise a Number of Psychedelics

A pre-filed New York state Bill would legalise adult possession, use, cultivation and gifting of “natural plant or fungus-based hallucinogens”, namely: DMT, ibogaine, mescaline, psilocybin and psilocin. However, the legislation would not legalise the sale of these substances.

Read the text of the Bill here.

It appears the floodgates have opened only to be greeted by a trickle. As of Wednesday lunchtime, Oregon Health Authority had received just 3 applications for manufacturer licenses and 40 work permit applications, according to information obtained by Psychedelic Alpha. It is unclear why no application had been received for other license types.