Yesterday, COMPASS Pathways announced that it has formed a long-term partnership to launch The Centre for Mental Health Research and Innovation “to accelerate psychedelic research and develop new models of care for mental health in the UK.”

COMPASS will work with the South London and Maudsley NHS Foundation Trust (SLaM) and the Institute of Psychiatry, Psychology and Neuroscience (IoPPN) not only to accelerate research into psychedelic therapies, but also to support therapist training and certification, the evaluation of real-world evidence and the prototyping of digital technologies to enable “personalised, predictive and preventative care models.”

COMPASS announced this collaboration last summer, but yesterday’s news adds colour to the scale of the partnership, including plans for a state-of-the-art facility to be built “within a 200 acre woodland” at Bethlem Royal Hospital, London. The company hopes this facility will host late-stage clinical trials, and provide access to COMP360 psilocybin therapy to “an estimated 650-700 patients over a five-year term.”

Artefact of the Week: The Handover List from COMPASS’ IP Chief

Our Editor-at-large Graham Pechenik shared an interesting to-do list on Twitter this week, but it wasn’t his own.

Rather, it was that of Nate Poulsen, who was signing a Transition Agreement with COMPASS Pathways last year.

Exhibit A in the filing outlines a number of IP projects to be finished or handed-over by December last year, as well as a list of ongoing applications and prosecution. 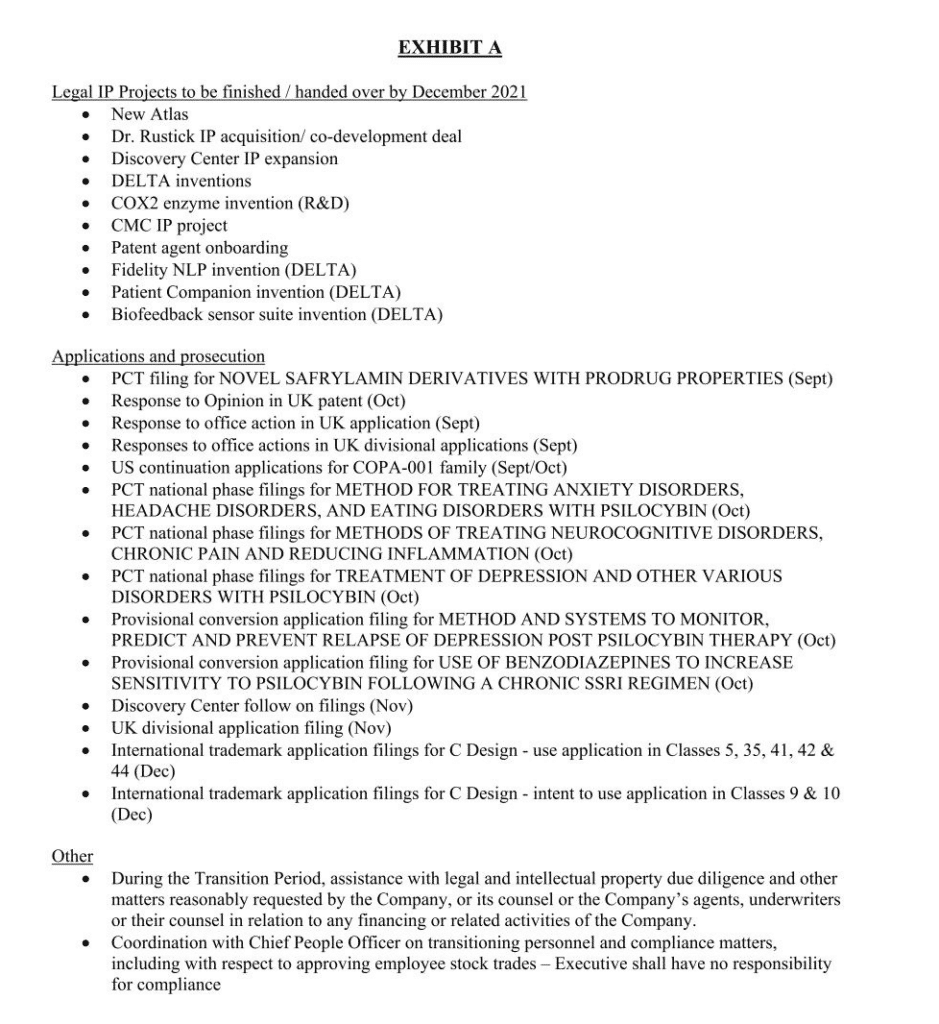 Pechenik matched-up some of the more interesting projects mentioned (including benzos to increase sensitivity to psilocybin following chronic SSRI use and ‘synaptic pathway training’) with links to further information.

h/t: Matt Ribel stumbled across this interesting artefact in an SEC filing directory. You can explore the full directory here.

Core One Labs announced that it’s looking to “investigate soliciting investment and potential takeover opportunities.” Our data showed this was a ticking time bomb, and the company’s leadership doesn’t exactly have a stellar track record.

“Acquisition or investment by a major pharmaceutical company could be mutually beneficial,” said CEO Joel Shacker in a statement that is, at best, optimistic; at worst, misleading.

But, that’s not the first time Shacker has made incredibly optimistic or unrealistic claims: last March, the company applied for a NASDAQ listing. Core One Labs (CSE: COOL) has a market cap of around CAD $30m.

The company also has a dizzying number of subsidiaries, with around 10 at the time of its last filings in fall 2021.

It’s certainly going to be a year of consolidation on the psychedelic public markets (note: weigh-in on our Twitter poll).

Warning: the footage in the article linked below contains testimony of sexual abuse and scenes of traumatic events.

Power Trip, a series of New York magazine’s Cover Story podcast (co-produced with psychedelics industry watchdog and critical voice Psymposia) reached a crescendo this week. The latest episode of the series was accompanied by the publication of footage depicting Meaghan Buisson’s experience as a MAPS trial participant. It is disturbing to say the least.

The footage shatters the imagery of a “peaceful, formal arrangement” that is so often portrayed by companies working in the space.

Much of the footage in this video looks like it comes from a security camera because it kind of does. It’s from a camera fixed to the wall of a treatment room, part of a routine medical setup. At the start of the video, you see a man adjusting the camera angle. The footage was supposed to be checked by professional monitors, who, if they saw it, might have asked some obvious questions: Why is this woman screaming? What are they doing in bed? Why is he using that soft doctor voice to tell her to spread her legs?

Many are asking questions of MAPS, including those around how timely and comprehensive the monitoring of such footage is. If a therapy session is recorded but the footage isn’t review in a timely or comprehensive fashion, is it really being monitored in a meaningful sense of the word?

Below, we share some notes on people’s responses to the footage (including MAPS’)…

Instead of using our platform to spout our own opinions, we’re curating a handful of reactions on Twitter:

We’re with @maraldy on this one: “It’s incredibly disheartening to see the stories being covered by @psymposia be described as sensationalist & gossipy. These are humans who were hurt, actual accounts of harm…”

MAPS has responded to Cover Story’s series in an article titled, Participant Experiences & “Cover Story,” published on its website.

Responding directly to the ethical violations depicted in the video and accounts of Buisson, they write that “MAPS views these violations as a breach of trust between patient and clinician and a violation of the MAPS Code of Ethics.”

Yensen and Dryer, the trial investigators in the video, were previously removed as investigators of MAPS-sponsored trials “for not complying with MAPS PBC’s requirements for providing study records in a timely and organized fashion.”

Toward the end of the latest episode the show’s hosts revealed that a 30-page complaint was submitted to FDA some months ago, outlining what they deemed to be ethical and research issues with MAPS’ MDMA-AT for PTSD trials.

The hosts were disappointed by FDA’s response, which came shortly after the airing of Episode 7; months after the complaint was filed. FDA explained that they had engaged in a workshop which included MAPS, but they weren’t willing to comment further.

How might the FDA respond to these accusations and revelations? Not just to this issue of sexual abuse, but also on the heterogeneity of the therapy administered alongside MDMA, and other allegations of methodological shortcomings.

The nonprofit BrainFutures has published an extensive report summarizing the clinical evidence surrounding psychedelics as potential treatments for mental health and substance use disorders.

A member of the BrainFutures team explained to us:

The paper takes a sober look at the clinical research to date and makes recommendations for adoption of some of these compounds as mainstream treatments for conditions like PTSD and treatment-resistant depression (once approved by the FDA). Our research looks at seven different psychedelics (psilocybin, ketamine, MDMA, LSD, DMT, ibogaine, and mescaline) and categorizes the clinical evidence for each by condition (depression, anxiety, opioid use disorder, etc.) We believe this is the most comprehensive summary of research on psychedelics as a class that currently exists. We think it will be a fantastic advocacy tool for companies, organizations, and advocates working in this space as they continue to make the case for psychedelics.

We love this: Stanford’s Boris Heifets (who has contributed to Psilocybin Alpha a number of times) has shared a number of lectures from a course he co-leads at Stanford (alongside Patricia Suppes and Gianni Glick): PSYC 215: Introduction to Psychedelic Medicine.

Check out this Twitter thread to find links to some of the lectures, which include guest lectures from Robin Carhart-Harris, Briand Anderson, Jennifer Mitchell, and Matt Baggott.