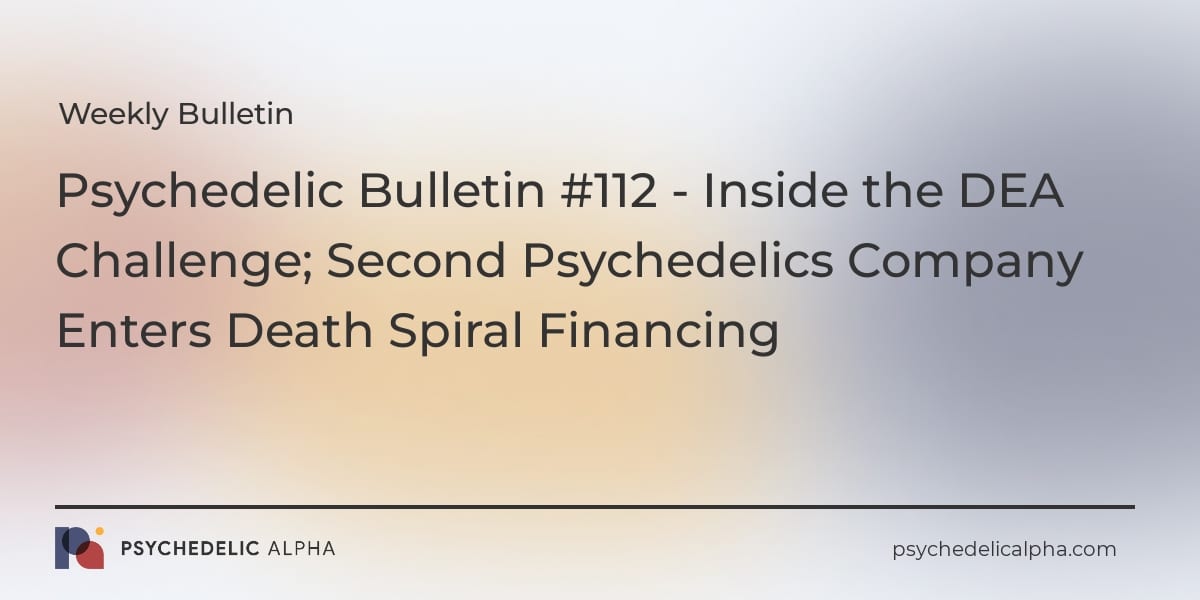 Special Report: Inside the Challenge to DEA’s Proposed Scheduling of 5 Psychedelic Tryptamines

Last week, the DEA ditched plans to place five tryptamines on Schedule I after a small group of researchers, psychedelic startups and lawyers challenged the agency.

Psychedelic Alpha was presented with around 200 documents pertaining to the docket, including evidence that was set to have its day in court on August 22nd. We sifted through these documents, along with public comments, to parse out some key takeaways from the proceedings.

In our Special Report, we dip in and out of some of what we deemed to be the most salient arguments and most interesting wrinkles in the proceedings. We certainly don’t cover everything.

Distressed financings like these were common in the cannabis space as companies ran out of cash. The emergence of deals like these in the psychedelics space should serve as a warning to investors and other stakeholders in companies with short cash runways, especially companies with tiny market caps like Silo.

Last Thursday, Vancouver-based Havn Life Sciences became the latest company to announce such a financing, announcing that it had entered into a CAD $9m financing arrangement with ABO.

We weren’t entirely surprised to see this: according to our data, Havn has been running on fumes for months.

Freedom to Operate (FTO) has filed requests for reconsideration with the U.S. Patent Trial and Appeal Board (PTAB) regarding its denial of both petitions for post-grant reviews of COMPASS’ Polymorph A psilocybin patents.

“We maintain our belief that the specifics of PTAB’s decisions have rendered the Compass patents of little practical value as a tool to stifle competition. At the same time, an important policy function is advanced when bad patents are challenged and invalidated. On this basis, we are asking the PTAB to reconsider its decisions as is provided for under U.S. patent law.”

In an analysis of the PTAB’s denial of FTO’s petitions published earlier this week, a quartet of Finnegan IP lawyers dissected the decision.

Eagle-eyed (or, eared) viewers of a video released by the company on LinkedIn will notice COMPASS’ Chief Medical Officer Dr Guy Goodwin manages to slip the phrase, “freedom to operate” in. Goodwin suggests that psilocybin “seems to unblock certain kinds of rigid ways of thinking,” before going on to say that, “it seems to give people a freedom to operate, if you might say, cognitively.”

ICYMI: we published the results of the inaugural Psychedelic Investor Pulse Survey.

We found investor sentiment is generally positive and optimistic, and is most positive among institutional-type investors. In our full analysis we explore investors’ willingness to hold onto their psychedelic investments.

We also found that larger investors intend to stick around. There is clear staying power among investors who have written larger cheques in the past 12 months (>$500,000), but those that made mid-sized allocations ($10,000 – $250,000) are expected to reduce their exposure to the space going forward.

The vast majority of investors are willing to wait over three years to see a return on their investments, with most respondents believing that the present level of interest in psychedelics is sustainable.

You can read the high-level findings, and download a 40-page report, on our dedicated webpage.

We're tracking opt-out initiatives in every municipality and county of Oregon.
Visit the Tracker
New Resource

Disturbing Documentary from Down Under

Australia’s public broadcaster, ABC, released a documentary via its Four Corners documentary brand that was teased by an article titled The mind field. The investigation revealed some disturbing allegations, to say the least.

The 50-minute doc, titled Psyched Up: The race to make psychedelic drugs part of mainstream medicine, can be streamed for free via the outlet’s website.

The coverage painted a troubling picture of the state of psychedelics down under, but it’s not all bad in Oz…

The Intercept reports that the Biden Administration “anticipates” approvals of MDMA and psilocybin within the next two years. A letter from SAMHSA suggests the organisation is “exploring the prospect of establishing a Federal Task Force to monitor and address the numerous complex issues assoicated with emerging substances,” the bucket in which MDMA and psilocybin are counted. Arguably demonstrating more spin than a Newport Beach SoulCycle class, atai founder Christian Angermayer responded to the news by tweeting at both Secretary Becerra and President Biden to thanks them for “endorsing” atai and COMPASS’ drug pipeline.

Rolling Stone asks: Can Psychedelics Avoid the Mistakes of the Cannabis Industry?

Crunchbase explores psychedelics as a “new frontier for venture funding.”

CBC reports that Health Canada has completed its review of all active MDMA-assisted therapy trials in the country. One study, sponsored by the Remedy Institute, has been suspended, while the MAPS-sponsored study will continue with corrective changes.