In this week’s Bulletin, we share a sneak peek of our forthcoming analysis on how psychedelic companies are spending their capital: after all, the sector raised $2bn last year alone.

Following the Money: How Much are Psychedelics Companies Spending on R&D?

We’re working on our next project. When complete, it will provide psychedelic sector stakeholders another lens through which to understand the for-profit players in the space: both at a sector-wide, comparative level; and company-by-company.

In our 2021 Year in Review we noted that nearly $2 billion was invested in the psychedelics sector last year, across more than 60 financing events. This new project will break down how this immense amount of capital is being spent.

It’s important to note that the data contained below, and that which will be shared in the coming weeks, is derived from public filings. Companies may have quirks and idiosyncrasies in how they categorise their spending. While the category of ‘Research & Development’ spending, for example, is a commonality among psychedelic companies; some spending on R&D may have been captured in other categories of spend such as via consultancy.

And, finally: companies work to different financial calendars. Naturally, then, some company data is more up-to-date or ‘complete’ than others.

Words and analysis from our Research Analyst Noah Smith…

Drug development is incredibly expensive: a 2020 study found that when failed drug trials are included, the mean cost of bringing a new drug candidate to market surpasses $1 billion. Even when failed trials aren’t considered, the mean total investment required to bring a single new drug to market exceeds $350 million.

These high costs associated with generating new drugs has contributed to the stagnation of novel developments across the board, including in psychiatry and neurology, with many companies choosing to tweak or repurpose existing drugs or attempt to extend the time-limited monopolies afforded to them via patents.

As companies work to advance psychedelic candidates through the development process, larger amounts of funding will be required. Companies who struggle to meet these demands risk being forced to suspend or abandon their development efforts.

This runway is shortening for many companies in the space as we enter a new year. Despite nearly $2 billion having been invested into the psychedelic sector last year, a number of companies will soon lack the ability to support their ongoing or planned R&D efforts without securing additional sources of funding.

Additionally, an underallocation of funding to R&D efforts could impact a company’s ability to sustain its drug programs moving forward. Consequently, the prudent and efficient allocation of funds will likely be integral to the long term success of these companies.

Over the course of 2021, a large contingent of psychedelic drug developers moved forward with drug discovery, preclinical investigations, and clinical trials. As public financial reports are released we can begin to gain a better understanding of how these companies allocate funding and what percentage of their operating costs are directly attributable to drug development efforts.

Below you will find a sample of company-specific statistics on R&D spending that are derived from filings published over the past year. While the sample of companies is by no means exhaustive, it provides a useful overview of R&D expenditure by psychedelics companies of various sizes at different stages of development. A small sample of expenditure statistics from non-psychedelic biotech companies is also presented below, for comparative purposes.

All financial statistics are derived from publicly-available company filings published since the beginning of 2021. Some of the referenced companies have only reported for three fiscal quarters. As such, subsequent financial statements will help shed more light on ongoing operating costs and efforts. In most cases, total costs are inclusive of both cash and non-cash expenses.

Sage Therapeutics, Anavex Life Sciences, and Madrigal Pharmaceuticals are all development-stage biotech companies with a range of ongoing programs including phase III clinical trials. Given the higher costs associated with later stage development efforts, companies like Sage Therapeutics, with multiple Phase II & III trials, have amassed annual R&D costs in excess of $250 million. Additionally, as represented in the graphs below, the operating costs of these companies are dominated by R&D expenditure. 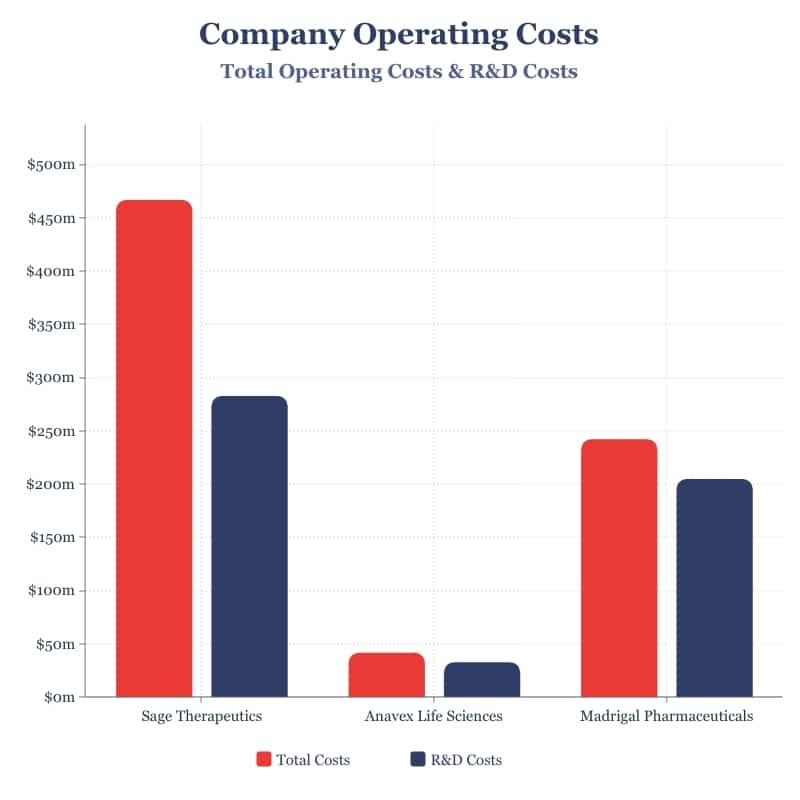 A Sample of Psychedelics Companies

Comparatively, not all companies operating in the psychedelic space are yet to allocate the majority of annual expenditure to research and development efforts. As represented in the graph below, for a number of these companies, R&D costs have accounted for less than a third of overall operating costs. 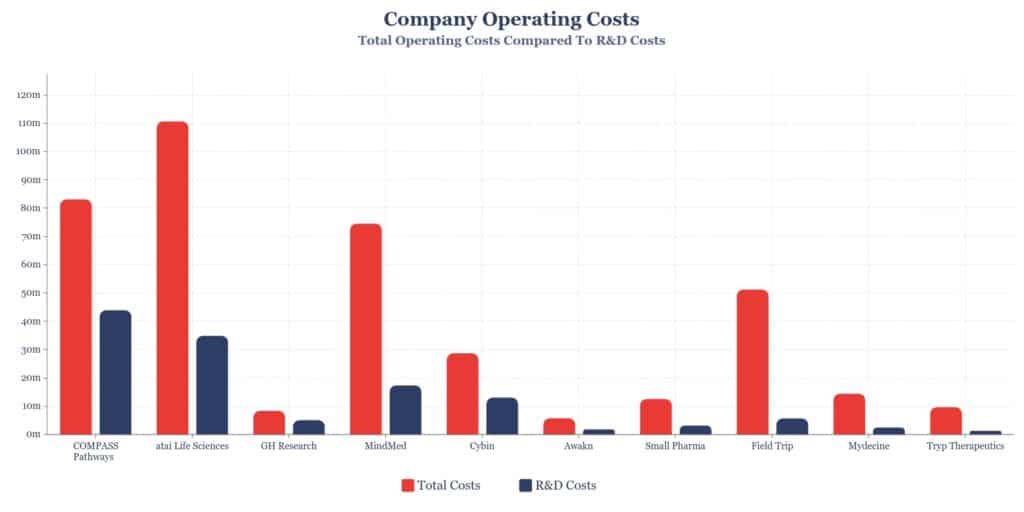 Now, let’s visualise this R&D spending data as a percentage of overall spend and add our biotech benchmark companies to the mix: 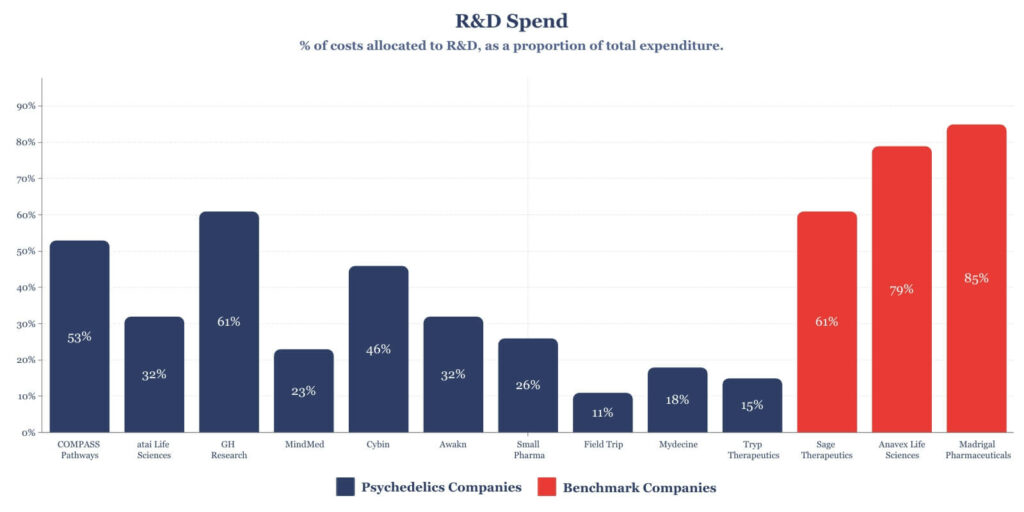 While the majority of the psychedelics companies referenced are primarily drug developers, companies such as Field Trip Health have established drug development programs to complement other ongoing efforts. In cases such as these, costs will understandably be more widely distributed across company focuses.

This past week the New York Times published an article covering a new book from ex-NIMH director Dr. Thomas Insel. While not directly related to the developments being made in the psychedelic space, the implications of Insel’s commentary on the state of mental health care in the United States are certainly worth reflecting on.

In the article, Dr. Insel reflects on the significant strides that have been made in the field of neuroscience over the past two decades. For much of his career, Dr. Insel was a strong proponent of the need to improve our fundamental understanding of the brain to enable the development of new, more effective treatments.

While Dr. Insel still maintains the importance of pursuing scientific research on the brain, his perspective on the growing challenge of mental health has evidently broadened. As he shares in the article, perhaps addressing the burden of mental illness is “not a research problem” but “an implementation problem.”

As psychedelic science continues to advance, it might be important to not lose sight of the other foundational issues that, if unresolved, could undermine the potential impact of even the most effective future treatments.

The implication is not that there is a misplaced focus on developing new, effective psychedelic-based treatment options. Instead, a complimentary focus also needs to be placed on ensuring that when these new treatments come to market, all patients in need can access and benefit from them.

A quote cited by Dr. Insel in the article might leave you with some good food for thought…

“Our house is on fire, and you are talking about the chemistry of the paint. What are you doing to put out this fire?”