On Tuesday, Psilocybin Alpha editor-at-large Graham Pechenik reported that a patent that claims DMT, 5-MeO-DMT, and 2C-B vapes has been granted.

The patent, titled Delivery System for Ayahuasca-Like Substances, was first filed as a provisional in July 2020 by an sole inventor, who also happens to be a registered patent lawyer. But, many have asserted that DMT vapes existed well before the priority date, leading to outrage at the granting of this patent.

Let’s check the very first claim made by the patent under discussion:

Okay, now let’s head to the Definitions section of the patent in order to make this legalese layperson’s speak. Three relevant excerpts:

So, claim 1 can be understood to claim a “vape cartridge” containing a vaporizable formulation (liquid and/or solid) of DMT, among other substances.

So, this patent claims a DMT (among other substances) vape: plain and simple.

Just under a year ago, Pechenik reported that Philip Morris, the multinational tobacco company, had filed a number of DMT-related patents including ones claiming e-cigarettes and related mechanisms that could be used to deliver drugs including DMT. This was covered by Shayla Love over at VICE.

But, it is this lone inventor who has successfully patented DMT vape pens.

Many Twitter users responded to the news with astonishment, noting that vaping DMT has long existed in naturalistic settings, with prominent prior art readily available to anyone with basic Google acumen (examples: VICE article from 2018; DoubleBlind article from 2020; an Erowid entry from 2014).

A quick search of a number of darknet markets further demonstrates the ubiquity of DMT vapes as both practice and product. 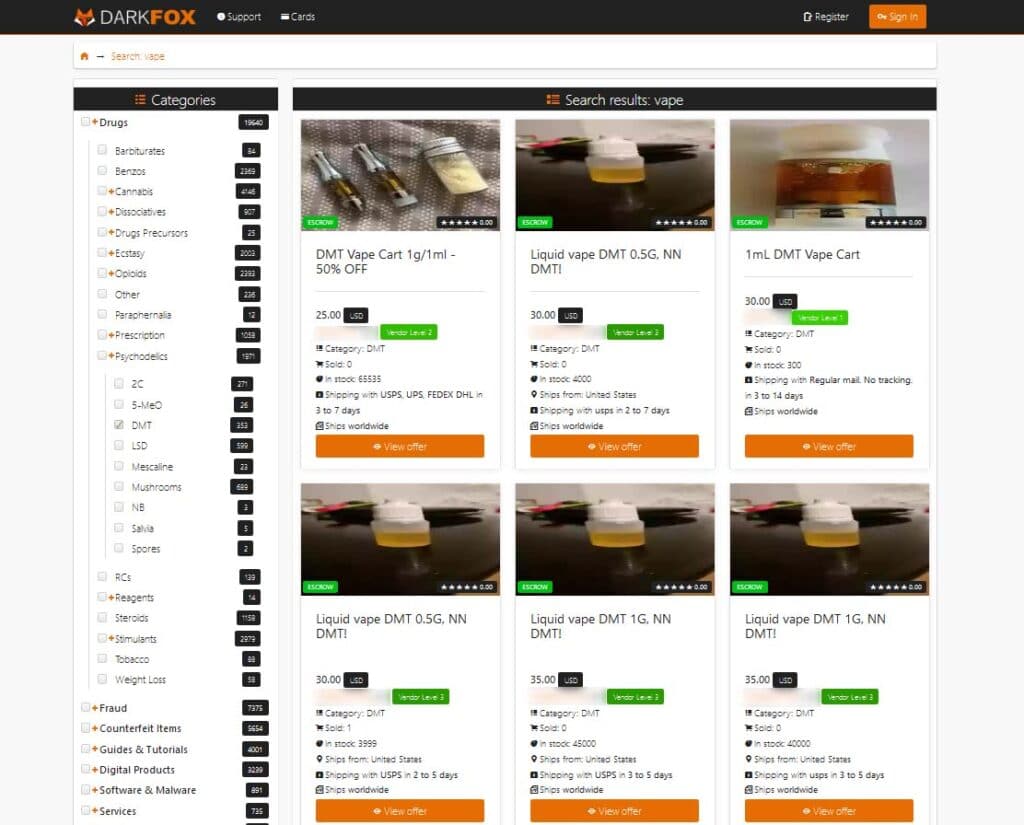 One vendor explains that, “A DMT vape pen is simply a vape pen, or E-cigarette, that uses an E-liquid cartridge containing DMT.” This is pretty much Claim 1 in simple terms.

How could this happen?

Given that prior art seems so readily available and easily accessible, how was this patent granted? A bit of digging suggests that the examiner failed to carry out an adequate search and review of prior art.

The USPTO shares a history of documents involved in the examining of a patent, including the examiner’s search strategy and results. The time-stamped report (which can be accessed here) provides a window into the rigour and breadth of the patent examiner’s prior art search.

Crucially, the examiner did not use the search terms “DMT” or “vape pen,” and only searched two repositories: Chemical Abstracts Plus (CAPLUS) and the U.S. Patent Database (USPATFULL). 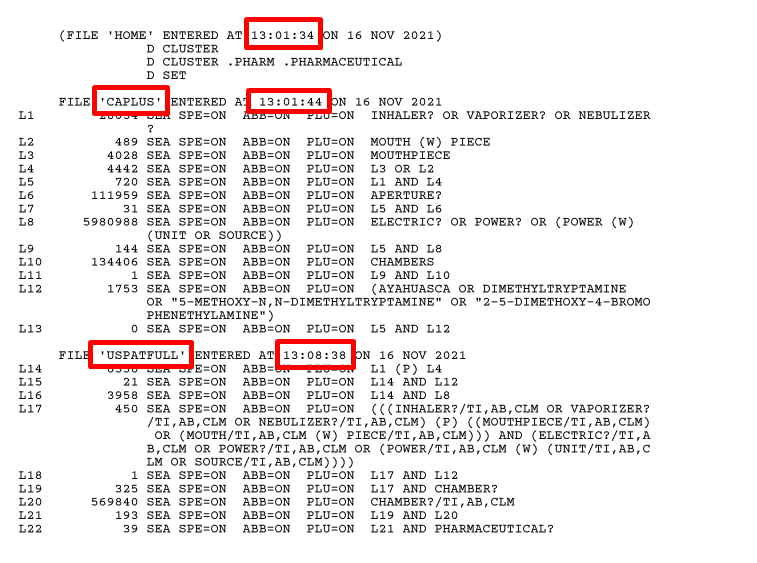 As you can see from the timestamps, it appears the examiner spent less than ten minutes searching and reviewing non-patent prior art, utilising just one database. Pechenik asked on Twitter: “Is that a careful enough analysis to support the grant of 20 years of patent exclusivity to an applicant?”

There’s also a broader element of luck at play, here. There’s a great level of heterogeneity across patent examiners, notably in terms of their willingness to grant patents (see Lemley and Sampat, 2012, for a broader discussion of this fact). This can be captured via a 3 year Grant Rate percentage.

Raymond Henley, the examiner of this particular patent, is the easiest in his area of specialism, granting 88% of patents that reached his desk in the past 3 years (n=595).

Can this patent be challenged?

Sure, patents can be challenged via the Post-Grant Review (PGR) process.

But, filing a petition for PGR can cost hundreds of thousands of dollars. That “might be a lot for whomever you’re buying vapes from,” Pechenik quipped.

As we noted in our review of Psychedelic Research & Clinical Trials in 2021: we shouldn’t write off microdosing entirely just yet. Further research, especially that with a focus on participants with clinical diagnoses of mental health disorders, may still be fruitful.

Psychedelics such as LSD and psilocybin from “magic mushrooms” have been proposed to ease depression. But the hallucination side effect makes these powerful drugs less ideal as therapeutics. Now, scientists in China have designed LSD analogs that appear to have solved the hallucination problem.

Note: we covered this research in last week’s Bulletin.

Looking Ahead to a Psychedelic 2022

In the last section of our Year in Review, we look ahead to a pyschedelic 2022 and share some key trends to follow.
Read the Section