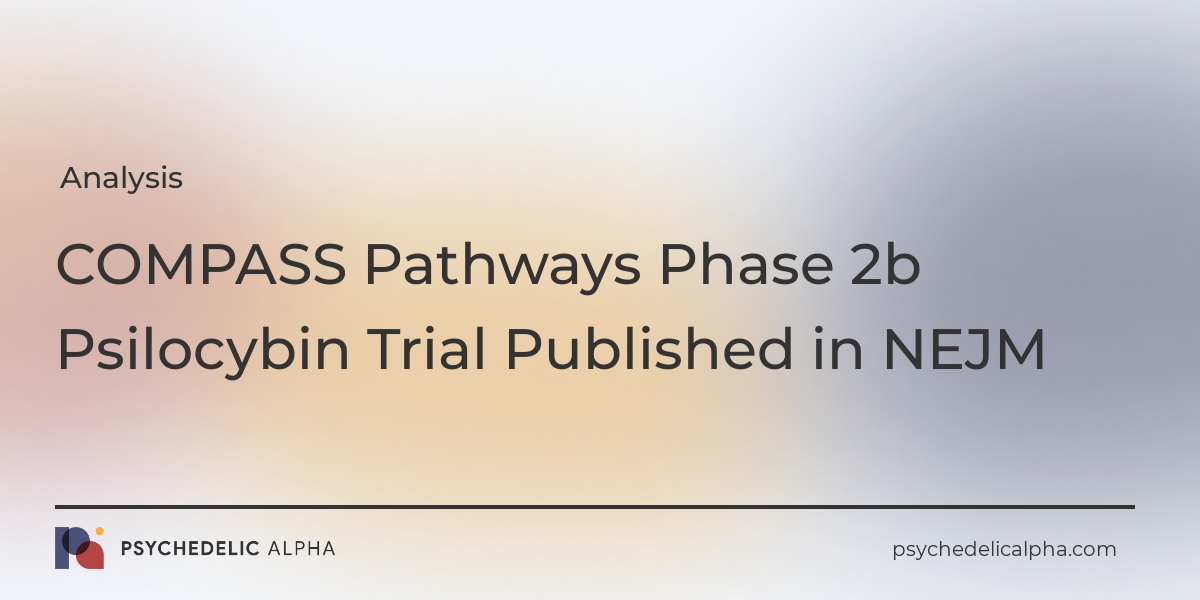 COMPASS Pathways’ Phase 2b trial of COMP360 psilocybin therapy for treatment-resistant depression (TRD) has been published in the New England Journal of Medicine. It becomes the largest published psilocybin trial to date (N=233), knocking NYU’s psilocybin for alcohol use disorder study (read our deep dive) off its perch after just a couple of months.

This is the second major psilocybin study to be published in the prestigious journal (see our coverage of the psilocybin vs. escitalopram study from 2021), which comes a year after the company published topline results from the trial (we won’t revisit the topline data in detail; see our deconstruction of the results here).

In terms of the headline findings, 37% of those in the 25mg group were responders at week 3, which (as the paper points out) “is lower than that described for first-line treatment of major depressive disorder in several large trials of citalopram”, and other conventional antidepressants. This figure is higher, though, than second-line treatments (see the STAR*D trial). But, we know that psilocybin would likely not be a first-line treatment; indeed, in this trial it was generally a third, fourth or fifth-line treatment.

Beyond response, remission rates at week 3 were 29% in the 25mg group. At week 12, 20% of this group were sustained responders. This figure appears to be down from the one circulated in topline results and touted by management, which was 24.1%. The reason, it seems, is because COMPASS decided not to go with the definition of “sustained response that is consistent with other TRD studies” when publishing the trial in a peer reviewed journal, instead opting to use the protocol-defined definition.

Remember: we’re only looking at 12 week follow-up data here. Results from longer-term follow-up with these patients will be critical. Establishing the durability of the psilocybin therapy’s effects will determine the clinical and health economic utility of the treatment.

Head-to-head trials comparing psilocybin therapy to existing protocols, such as CBT, will also be important endeavours. NYU’s Rick Zeifman noted that CBT has been shown to have a 26 % remmision rate in TRD patients at a 12-month follow-up, for example.

Achieving sustained remission in 20% of patients is certainly promising, given the treatment-resistant nature of the participants’ diagnoses. But, is it the blockbuster result that many had hoped for?

“The findings were positive, but not what I could call ‘spectacular’, UCL’s Dr Ravi Das told Science Media Centre. Das takes issue with the uneven proportions of severely depressed people in different arms of the experiment, noting that there were “significantly fewer severely depressed people in the apparent ‘effective’ (25mg) dose group”, which is not addressed in the paper. Dr. Matthew Johnson dismissed the critique, suggesting it’s not significant.

Last year, upon publication of the topline results from this trial, the company’s stock took a serious tumble, presumably due to investors’ perception of these results as lacklustre, especially when coupled with adverse events.

On that topic, we discussed and contextualised adverse events in our deconstruction of the initial results, but since this peer-reviewed publication a number of experts have come to the fore to discuss the matter once again.

Dr Natalie Gukasyan started an interesting discussion on Twitter around how adverse events are defined in the context of psychedelics, and how we can understand their significance in a relatively small sample of people with TRD. Gukasyan supposed that higher rates of suicidal ideation, for example, might be reflective of the desperation seen in patients who didn’t respond to the treatment, especially given the amount of hype around psilocybin for depression. As Johns Hopkins’ Sandeep Nayak notes, supplemental data showed that the 3 patients that displayed suicidal behaviour in the 25 mg group were all non-responders, supporting this thesis.

We do glean some additional information from this publication. Notably, we learn more about what COMPASS means by “psychological support”, a phrase that the company prefers to use as opposed to “therapy”. Some have suspected that COMPASS will seek to achieve reduced labour intensity in its protocol vs., say, MAPS’ MDMA-assisted therapy for PTSD which sees two therapists engaging with patients at each session.

Of course, one arm of COMPASS’ Phase 3 program will evaluate two doses of COMP360 psilocybin, which will increase the number of therapist hours (and thus costs) associated with the protocol. But, the company will hope that this additional may boost the portion of sustained responders.

The publication is accompanied by an editorial from Dr. Bertha Madras, who expresses a broad range of concerns surrounding the trials and potential roll-out of psychedelic therapy. Some readers won’t be too surprised here: Madras has been a prominent critic of marijuana policy reform, claiming that marijuana is profoundly dangerous if used for non-medical purposes. Notably, she served as deputy director for demand reduction for the Office of National Drug Control Policy under George W. Bush.

In this editorial, Madras expresses concern with the standard of evidence in trials (which may be compromised by expectancy bias, selection bias, etc.); the efficacy displayed in these trials; the ability to scale up psychedelic therapy while retaining fidelity to the protocols used in clinical trials; and, concerns around “unregulated clinics” and a broader push to increase access to psychedelics.

While some of Madras’ points are valid (notably, those on the pitfalls of psychedelics clinical trial designs and the difficulties that will present themselves when these protocols are to be scaled up and rolled out to broader patient populations), it is our opinion that others are unreasonable.

For example, Madras expresses concern that we may see a proliferation of “unregulated clinics, as has happened with ketamine clinics.” Ketamine clinics have been able to operate with relative ease due to the fact that they’re using ketamine off-label. Psychedelics, if and when approved by the FDA, will almost certainly be subject to strict Risk Evaluation and Mitigation Strategies (REMS) which will stipulate many elements of how they are prescribed and delivered, and to whom. This would make “unregulated” practices, akin to ketamine clinics in Madras’ example, untenable. Oddly enough, Madras explains this in the sentence which immediately precedes her comparison to ketamine clinics.

Specifics aside, this Phase 2b trial leaves us all with many questions. Now, as explained in our mid-October Bulletin, the company will attempt to answer some of the most pertinent questions in its ambitious Phase 3 program.