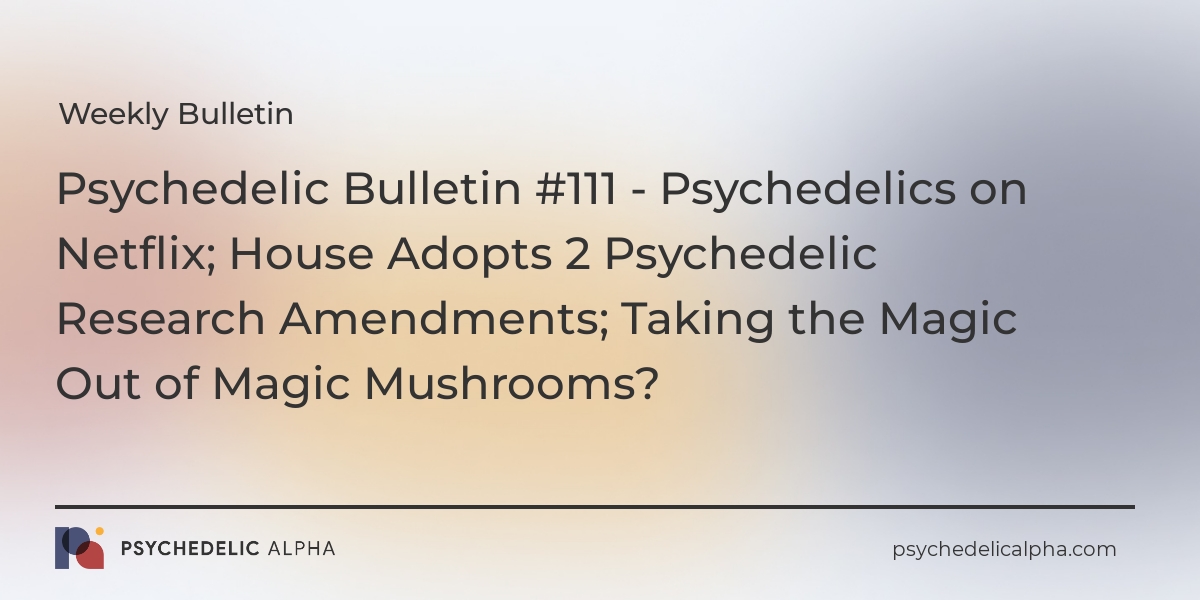 How to Change Your Mind Hits Netflix

The Netflix adaptation of Michael Pollan’s best-seller book, How to Change Your Mind, aired on Netflix this past Tuesday.

The response from both within and outside the psychedelics space has largely been positive. The Guardian’s Stuart Heritage, for example, described it as “hugely eloquent and convincing.” The docuseries also received attention from some high-profile folks, including Jaden Smith who appeared to have foreshadowed the documentary in a March ‘22 tweet.

While some were concerned by the broadly optimistic leaning, this author believes that cautious optimism might serve as a tonic to the past half-century of largely unfounded mudslinging that psychedelics—and those who explore and use them—have suffered.

However, there certainly could have been more of a scientific grounding and attention to possible negative side-effects (potential risks associated with microdosing, for example, were not discussed – see our discussion with Dr. Kelan Thomas on this matter), instances of unethical conduct, and the equivocal nature of the evidence for many compounds and use cases. But this is perhaps reflective of a number of factors associated with producing a popular docuseries which entails condensing such a nuanced topic into a docuseries that’s just shy of four hours in its entirety.

We were pleased to see an entire episode (E04) dedicated to discussing the repercussions of what might appear to be (to some, at least) an uncontroversial and intuitive call to ‘decriminalise nature’; namely, worsening the precarious cultural and ecological context in which indigenous folks practice their rites. We discussed the most pertinent example of this, the case of peyote, in last week’s Bulletin.

Perhaps proving our earlier point, however: the Mescaline episode was the most poorly-rated one according to IMDB. So far it has received a rating of 6.4, while the prior three episodes scored an average of 8.

Alongside the airing of the Netflix docuseries the UC Berkeley Center for the Science of Psychedelic (BCSP, at which Pollan is among the Leadership) launched its website, which serves as an introductory guide to the “potential of psychedelics for the betterment of all”.

We are proud to have a number of our resources featured on BCSP’s site including our Psychedelic Patent, Drug Development and Policy Reform Trackers and are excited to further integrate these datasets into BCSP’s educational efforts. 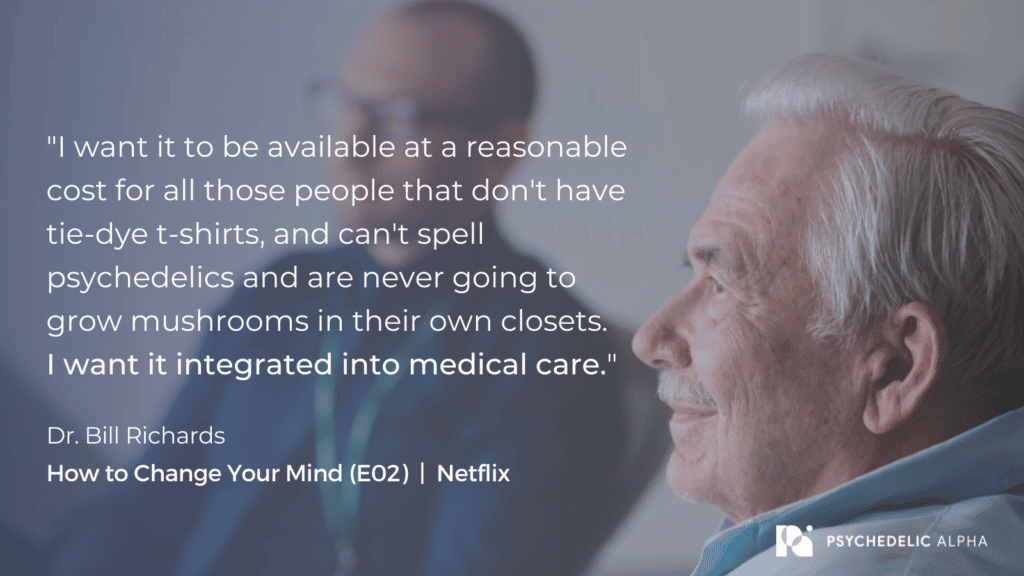 Some less structured notes on the release…

One user posting on the MindMedInvestorsClub subreddit

“I wish I could go back in time and CHANGE MY MIND about dropping 20k into this shit.”

Risks Associated with an Optimistic Tone?

While there hasn’t been a dramatic uptick in search interest for psychedelics, the docuseries is climbing the Netflix rankings and has sent ‘Psilocybin’ trending on Twitter a number of times in the past week.

This has led some to express concern around people seeking out psychedelics in the hopes that they may help with their ailments, but without doing so within an appropriate therapeutic container.

You don’t have to look far to see such behaviour being expressed on social media, though we do have to assume a portion of it is tongue-in-cheek (one Twitter user, for example, said that after watching the series they were going to ingest a trash bag full of ‘shrooms).

Many people appear to have been captivated by one man’s remarkable testimony from his experiences in a psilocybin for OCD trial: 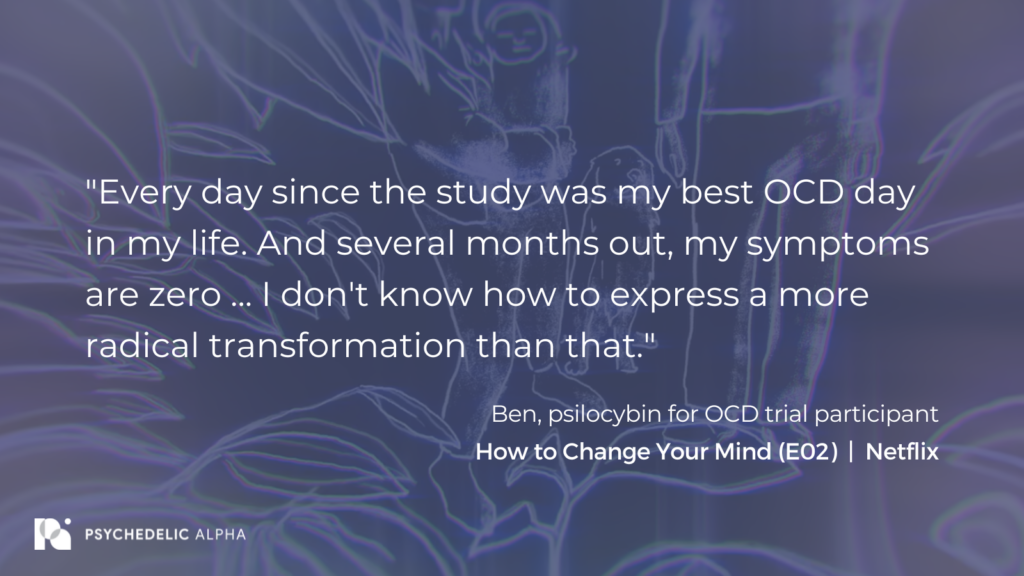 While this experience is certainly exciting, the evidence base is far from mature. Yesterday, Dr. David Erritzoe told Insider’s Dr. Catherine Schuster-Bruce that there is “no solid evidence” for the use of psilocybin for OCD.

In the U.S. figures from polar opposite ends of the political spectrum have found shared ground in securing amendments to defence spending that would support psychedelic-assisted therapy for active duty military and veterans.

The House of Representatives adopted a pair of amendments to the annual National Defense Authorization Act (NDAA) for 2023 which may represent a legitimising step for the psychedelics reform movement at the federal level.

The pair who forwarded the amendments, Dan Crenshaw (R-Texas) and Alexandria Ocasio-Cortez (‘AOC’; D-NY) couldn’t be a better embodiment of chalk and cheese.

Crenshaw, himself a Navy SEAL wounded in action, is a stalwart conservative. He’s anti-abortion, opposes gun control, downplayed COVID-19, and was generally supportive of Trump. AOC, meanwhile, represents the vibrant and unapologetic new left of the Democratic Party. One of the first members of the Democratic Socialists of America (DSA) to be elected to serve in Congress, her voting record and public remarks are, unsurprisingly, almost entirely the opposite to Crenshaw’s.

It’s remarkable, then, that the pair have found common ground in their support of modestly reducing federal restrictions on certain psychedelic research. AOC’s amendment expands the routes through which MDMA and psilocybin might be studied as therapeutics (specifically in the context of opioid alternatives); Crenshaw’s expands the pool of substances to include others like 5-MeO-DMT and ibogaine through the establishment of a Pentagon grant program that would focus on research into harnessing this class of drugs for the treatment of PTSD in active duty service members.

But, this bipartisan support for psychedelics is not necessarily new, or collaborative. Rather, it has been consciously cultivated by certain groups throughout the psychedelic renaissance, not least by MAPS. The choice of PTSD as a lead indication was, in itself, a strategic choice that paved the way for psychedelic research and therapy to capitalise on the political and cultural salience of veterans in North America. Speaking to Boston Magazine in Fall 2019 Rick Doblin explained that MAPS, “don’t really do science; we do political science.”

It’s also not clear that the two worked collaboratively on their legislation. In fact, there are signs to the contrary.

Secondly, as Kyle Jaeger at Marijuana Moment reports, Crenshaw has repeatedly voted against earlier amendments to appropriations legislation forwarded by AOC that would have promoted research into psychedelics as medicines (one of these earlier efforts by AOC was co-sponsored by Republican Matt Gaetz, who was marred by federal investigations).

The fact that what appears to be a bipartisan effort is in reality disjointed should not be surprising: these folks would be unlikely, and uncomfortable, political bedfellows.

Beyond a lack of coordination between efforts, the Senate remains a key hurdle and is expected to whittle down the NDAA’s more progressive elements. In fact, the current draft of the bill in the Senate neglects to feature the two psychedelics-related amendments.

It remains to be seen whether these psychedelics reforms will make it through the dialectical process of inter-house compromise and debate in the coming weeks. Nonetheless, the fact that these amendments were adopted by the House is a promising development.

“Taking the Magic Out of Magic Mushrooms”

In an Opinion piece for NY Times, Dr. Dana G. Smith explores the debate around efforts to create ‘non-hallucinogenic’ psychedelics, asking: “are hallucinations a feature of psychedelic therapy or a bug?”

Proponents interviewed by Smith include David Olson and Bryan Roth, both working on developing non-hallucinogenic psychedelics (or, ‘psychoplastogens’) in the context of academic and commercial pursuits. Olson spun out some of his work at UC Davis via Delix Therapeutics, though the division between his Lab and startup is a little blurry with the Lab receiving funding from NIDA (Bulletin #104) and the startup partnering with the same Institute; Roth, meanwhile, works out of UNC where his research has enjoyed support from a substantial DARPA grant. He also advises a number of psychedelics companies.

On the skeptical side, meanwhile, fellow academics like David Yaden and Robin Carhart-Harris fail to see how non-hallucinogenic psychedelics can maintain their apparent therapeutic benefits without an alteration in consciousness. Carhart-Harris told Smith:

“I just think it rests on flawed assumptions that you can get the plasticity effect” without an alteration in consciousness, he said. “They might create something akin to psychedelic tofu or microdosing or something that isn’t that trippy, that does a little bit of plasticity but it’s not really transformative.”

(Note: as a vegetarian, this author does not appreciate the tofu quip!)

The heated debate over this topic is set to continue for some time as psychoplastogens will only begin to enter the clinic later this year. It’s a matter that many hold strong opinions on, so Roth’s purported agnosticism is refreshing:

But, Yaden broadens the debate even further by arguing that even if non-hallucinogenic psychedelics prove efficacious, denying certain patients the subjective experience of a ‘true’ psychedelic represents an ethical issue: “I struggle to find rationale for withholding such a meaningful experience.” Yaden published on this matter recently alongside Roland Griffiths and Brian Earp (available for free on ResearchGate).

Regardless of the debate, interest and investment in the field is unabated. For example, NIH announced grant funding opportunities for the therapeutic development of psychoplastogenic compounds for substance use disorders late last month, with NIDA intending to commit around $2m to fund 5-10 small awards in FY 2023.

Last Chance to Enrol in Stanford Online Course: Far from Far Out: Policy Perspectives on the Psychedelic Renaissance

Led by Laurel Kilgour and with guest lectures from the likes of our very own Graham Pechenik, this 5-week summer course from Stanford looks fascinating.

Some of the questions that will be explored include:

Students “will examine current legal frameworks and academic scholarship through readings, lectures, and sessions with guest speakers. We will conclude by considering emerging policy proposals for governing the future of psychedelics. This course is open to anyone interested in exploring the policy challenges and implications of decriminalizing psychedelics.”

Enrolment closes Sunday 17th July (contrary to the date listed on the webpage).

P.S. We’re excited to be providing a micro-scholarship to Erin Eberle. They’ll share their thoughts on the course in a Bulletin once it wraps.