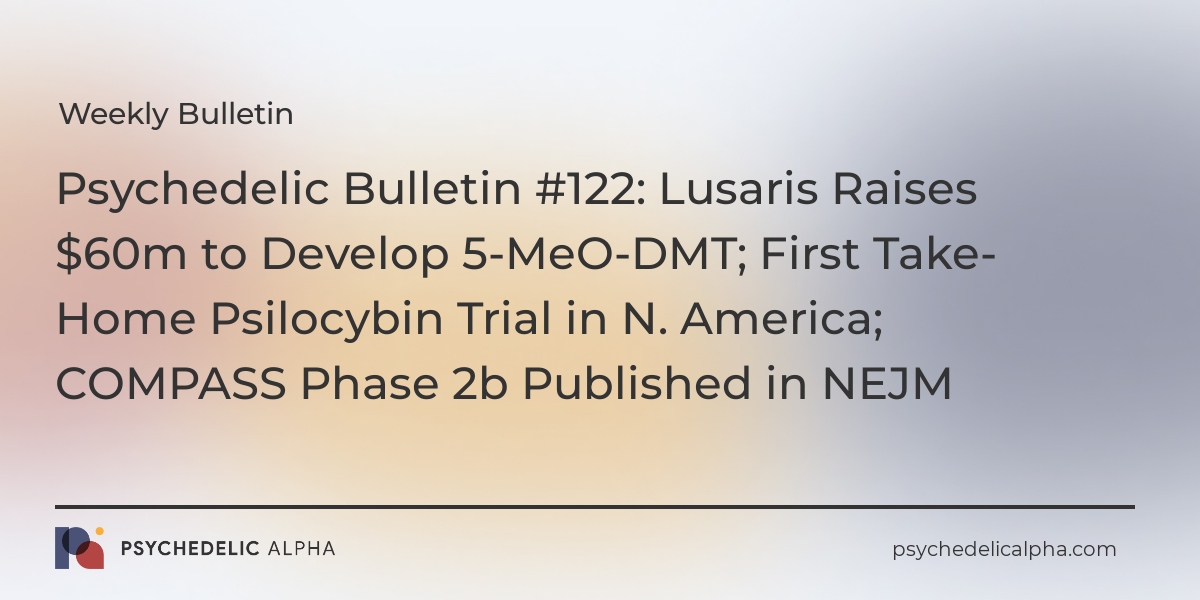 GH Research’s lead investor incubates its own 5-MeO-DMT company: Lusaris Therapeutics has emerged from stealth with a $60m Series A round, led by RA Capital, to propel sublingual 5-MeO-DMT formulation through trials.

The company’s lead candidate, LSR-1019, is a sublingual formulation of 5-MeO-DMT for treatment-resistant depression (TRD) and other neuropsychiatric indications. As such, this marks the second significant investment in the molecule by RA Capital, which incubated Lusaris and led the Series A. Their first was GH Research…

What’s Going on at GH Research?

A year and a half ago, RA Capital co-led Dublin-based GH Research’s $125m Series B financing to support the clinical development of inhaled 5-MeO-DMT (GH001) in TRD, among other conditions. Venrock and Boxer Capital also participated in this round, as well as Lusaris’ recent Series A. All that to say: there’s a clear interest in this particular molecule from this group of established healthcare and life sciences investors.

With around $250m cash on hand, GH Research has a runway that will likely take them into 2025. Despite having the largest marketcap among public psychedelics companies and one of the largest cash piles, many are wondering whether GH’s progress is on course.

According to the company’s latest filings it spent $4.2m on R&D in Q2 and $2.5m on G&A. Compare this with some comps: Small Pharma (which has just over a tenth of the cash on hand of GH) spent $2.7m, while COMPASS Pathways (which has around $170m cash on hand) spent $14m on R&D in its most recent filed quarter.

The Phase 2 part of GH’s Phase 1/2 trial out of Maastricht enrolled just 8 patients to receive the inhalable 5-MeO-DMT formulation. While results were impressive, with 7 of the 8 TRD patients in remission 7 days after dosing, such a small sample size and lack of placebo control dampens the utility of such findings.

GH Research is a tight-lipped company, but filings and clinical trial registry entries show that it was planning to submit clinical trial applications for an 80 patient Phase 2b of GH001 in a number of European countries this past quarter. Elsewhere, the company initiated two proof-of-concept Phase 2a studies of GH001 in Bipolar II Disorder and Post-partum Depression. GH also planned to submit an IND with the FDA for GH001 in TRD by Q1 2023, which would lead to a Phase 1 imaging study.

One thing to know about GH001 is that it employs an individualised dosing regimen, which is seen by some as complicated; especially when combined with the inhalation delivery mechanism which entails the use of a Volcano vaporiser and balloon.

It’s most likely, in this author’s opinion, that RA Capital thought a less convoluted dosing regimen would be beneficial: say, one dose via a sublingual tablet. This wrinkle in GH’s program was presumably what led RA to incubate Lusaris, though it’s unclear why this couldn’t have been integrated into GH’s operation.

Indeed, while Lusaris avoided our question of how they’re differentiated from their fellow RA Capital-backed GH Research, their response hinted that issues with the drug delivery system might indeed be the reason for the company’s new direction in that regard. “[Lusaris’] approach is scalable, eliminates the need for burdensome drug delivery systems, simplifies administration, and offers the potential for more consistent exposure and more predictable therapeutic benefit in patients,” the company told Psychedelic Alpha.

Alongside its Series A announcement, Lusaris revealed that it has secured an exclusive worldwide licence to Catalent’s Zydis orally disintegrating tablet tech. Lusaris isn’t the first psychedelics company to strike up a deal with Catalent for this popular drug delivery method: both Cybin and Awakn have entered into drug development agreements with the company (a point that Awakn was keen to emphasise in an investor communication following Lusaris’ news).

Note, however, that Lusaris has been granted an exclusive licence to use Catalent’s Zydis tablet tech, which is much more significant than the other two drug developers’ drug development agreements, which generally entail feasibility studies at this stage. Lusaris told Psychedelic Alpha that the licence “covers the molecule 5-MeO-DMT in the Zydis platform for all related formulations and indications.” This would presumably prevent companies like GH Research from piggy-backing on the Zydis drug delivery mechanism.

Lusaris expects to initiate Phase 1 clinical studies of LSR-1019 imminently, with a readout in mid-2023. The company is also building a portfolio of novel serotonergic neuroplastogens for a range of conditions including migraine and cluster headache, according to the press release.

Others Trialling the Toad

A number of other groups are exploring 5-MeO-DMT, including Beckley Psytech and Alvarius Pharmaceuticals.

For its part, Beckley dosed its first healthy volunteers in its Phase 1 trial of a dry powder intranasal spray formulation of 5-MeO-DMT (BPL-003) in Spring this year. The study, which took place at King’s College London and enrolled 36 patients (of the 52 anticipated), was completed in early July. The company announced BPL-003 as its lead candidate for upcoming Phase 2 studies in depression and alcohol use disorder, where the intranasal 5-MeO-DMT is delivered in combination with psychotherapy.

Alvarius Pharmaceuticals, meanwhile, was funded by Christian Angermayer’s Re:Mind Capital back in early 2021 when it secured EUR 2.7m. It was a spin-out from cannabis research co Greenlight Medicines and University College Dublin’s start-up accelerator, NovaUCD. No news on what stage this company’s at.

B.More’s homepage still describes the organisation as “a non-profit lifescience company, backing clinical research for regulatory approval of psychedelic medicines…”. But, word on the street (and now in the text of journalist Marc Gunther’s latest) is that the organisation, founded and led by Carey Turnbull, has been seeking investors of late.

The company has a focus on psilocybin for alcohol use disorder (AUD), and has licensed the data and a provisional patent application from NYU’s recent study on the topic (see our deep dive in Bulletin #117). Speaking to Bloomberg’s Tiffany Kary, he was keen to explain that “[t]his NYU patent isn’t a blocking patent”. It’s not clear what was meant by this. Turnbull chairs the advisory board of the NYU Langone Health Center for Psychedelic Medicine and provided grants to the lead author, Michael Bogenschutz.

Some have, in passing, likened these recent actions to COMPASS Pathways’ switch from a nonprofit funder of psychedelic research to a for-profit drug developer. That change was characterised by a move away from principles of open science and collaboration toward a focus on defensibility and exclusivity: manifested in researcher agreements to patents (as is customary in this segment).

However, more nuanced folks will understand that the costs involved in bringing a drug to market (in almost all cases) necessitate the inflow of investment dollars. Turnbull’s mission appears to be rooted in bringing psychedelic medicine to people at scale, in a low-cost manner: this is not inherently incompatible with the recent developments described here. He also has a much longer (and more prolific) track record of funding non-profit research than COMPASS’ former non-profit incarnation did, to be sure.

Some, though, will be surprised that the staunch anti-COMPASS voice (Turnbull’s nonprofit, Freedom to Operate, has spent large amounts of time and money going after COMPASS’ patents) is getting into the for-profit psychedelic drug development game himself, patents and all.

Notes: Turnbull is also Founder and CEO of for-profit drug developer Ceruvia Lifesciences, which is investigating psychedelics for headache disorders and OCD. B.More expects to commence a Phase 2b trial of psilocybin for AUD in early 2023.

COMPASS Phase 2b Published in NEJM

COMPASS Pathways’ Phase 2b trial of COMP360 psilocybin therapy for treatment-resistant depression (TRD) has been published in the New England Journal of Medicine. It becomes the largest published psilocybin trial to date (N=233), knocking NYU’s psilocybin for alcohol use disorder study (read our deep dive) off its perch after just a couple of months.

This is the second major psilocybin study to be published in the prestigious journal (see our coverage of the psilocybin vs. escitalopram study from 2021), which comes a year after the company published topline results from the trial (we won’t revisit the topline data in detail; see our deconstruction of the results here).

Read our quick-take analysis of the results here. See also a collection of others’ reactions that Michael Haichin pulled together over on Twitter.

The publication has caused another wave of mainstream media interest, including the following headlines:

Vancouver-based Apex Labs has received a No Objection Letter from Health Canada, allowing them to proceed with a multi-dose take-home psilocybin trial. This is thought to be North America’s first trial of psilocybin taken at home.

The phase 2 trial will evaluate the company’s low-dose, multi-dose orally administered synthetic psilocybin (APEX-52) in the treatment of depression in veterans with PTSD.

Speaking to Psychedelic Alpha, Apex’s CEO Tyler Powell said that he expects the first patient to be dosed in thirty days’ time, with the protocol taking two months. The CEO wouldn’t disclose the number of doses in the protocol, nor their timing, but said that the trial “follows a regular and frequent dosing schedule.” Powell also declined to disclose how many doses of psilocybin will be dispensed to participants at any given time.

The press release noted that “Veterans are already self-medicating with micro-doses of unregulated psilocybin products”, which led us to wonder whether these people might be excluded from the study. Powell answered in the negative, explaining that the trial’s inclusion criteria “allow patients with PTSD symptoms that are currently self-administering illicit/unregulated psilocybin products”. Participants will only have to stop taking psilocybin sourced elsewhere for the duration of the study, he went on to explain. We wonder how this might affect the utility of the trial’s results.

In terms of the product itself, the synthetic psilocybin was purchased from psychedelic manufacturer Psygen, then formulated at a third-party lab.

Read the Bulletin  |  October was a relatively quiet month for psychedelic research. Nonetheless, we still gained some valuable new insights into the world of psychedelics. Natural language processing (NLP) was used to successfully predict clinical outcomes using data from a trial exploring psilocybin on treatment-resistant depression (TRD); but only after the first psilocybin session had taken place. The first real-world study assessing esketamine for TRD yielded positive results. At the same time, new evidence suggests people who microdose may build up a tolerance.