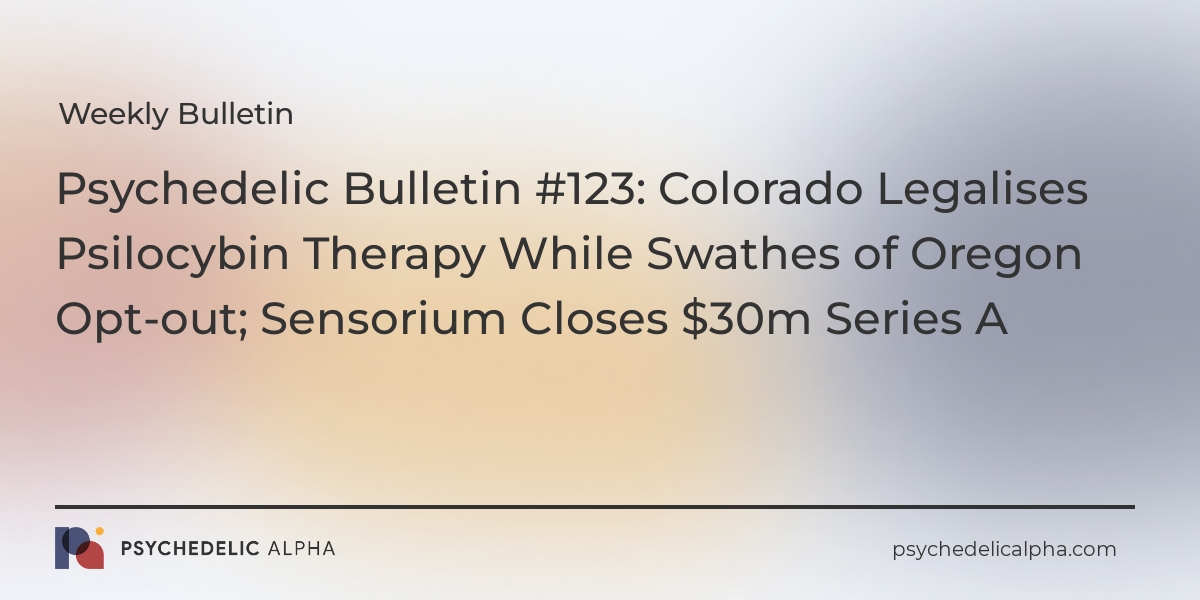 After months of tense debate and mudslinging between proponents and detractors of the proposition, referred to as the Natural Medicine Health Act, the pre-election polls were incredibly narrow.

A poll conducted in the last week of October, for example, suggested it would be a very close call, with 43% of voters intending to support the measure and 44.2% planning to oppose it. Support was trending up substantially from 36.3% in September, with around 10% of Coloradan voters leaving the “unsure” camp since then. With 12.8% of voters still undecided at this final pre-election poll, it was a nail-biting election.

As displayed on our dedicated Psychedelics on the Ballot webpage, the earliest results showed a significant lead for the Yes camp, but this quickly narrowed to a razor’s edge.

Despite the fact that the race remained narrow, with just over 2 percent between the Yes and No votes, we called a Yes vote at noon ET on Wednesday based on our analysis of counties’ unreported votes. At the time of writing, the Yes votes are sitting at around 52%: a narrow victory by any measure.

Prop. 122 will create a state-regulated supervised psilocybin therapy in 2024, and decriminalises a number of psychedelics. See a recent Psychedelic Alpha Opinions piece, The Facts on Colorado Proposition 122, for more on the specifics.

Ten years ago, Colorado and Washington became the first states to legalise the possession and cultivation of cannabis for recreational or ‘adult use’ purposes. Today, both states look to be repeating their progressive drug policy reforms in the case of psychedelics.

Last summer, Washington state reduced penalties for personal use and possession of scheduled drugs, and a couple of its cities have passed resolutions that make the investigation, arrest, and prosecution of adults engaging in “entheogen-related activities” among the lowest law enforcement priorities.

If psychedelic drug policy reform follows a similar state-by-state route as marijuana adult use legalisation, where might we expect to see the most fruitful activity next?

After Washington and Colorado legalised adult use in 2012, Oregon, DC and Alaska followed suit in 2014, with California and three other states enacting similar legislation in 2016.

While Oregon was among the first states to enact adult use marijuana laws, it was the first state in the US to establish a regulated supervised psilocybin services program, via Measure 109. DC, meanwhile, made the investigation and arrest of persons engaging in non-commercial activities related to entheogenic plants and fungi among the lowest enforcement priorities following the passage of Initiative 81 in November 2020. No word on Alaska yet, though.

After California’s decrim. Bill was snubbed by lawmakers earlier this year, might we expect a revival in 2023? If the adult use marijuana legislation timeline is anything to go by, we should expect the golden state to enact state-wide legislation soon. Today, only a handful of cities in California have enacted legislation to effectively decriminalise certain psychedelics.

Analysis: Many of Oregon’s Counties and Cities Opt-Out of Psilocybin Services

We have updated our Oregon Psilocybin Services Act Local Jurisdiction Tracker to reflect the Midterm election results, which included a number of opt-out measures at the county and city level. 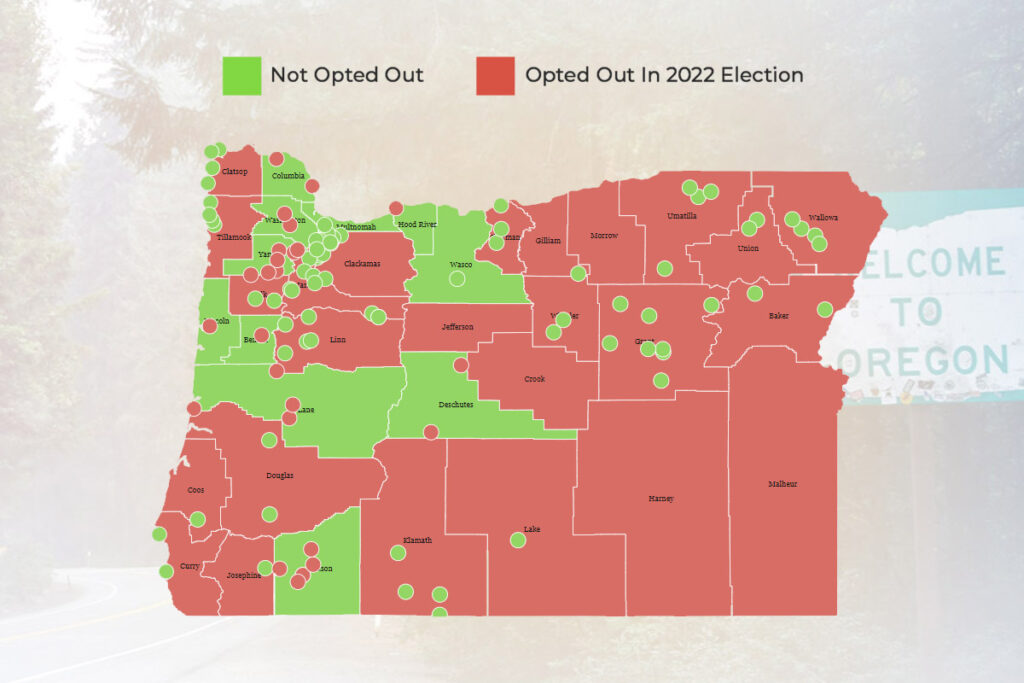 While the map might look very ‘red’, it’s important to remember a few things:

Amidst the spectre of state-regulated trips, some counties see voters flip

The cities of Sandy, Astacada and Molalla, for example, all voted to opt-out of psilocybin services by over 60%, according to initial results. The county within which these cities sit, Clackamas, saw 57.7% of early votes supporting an opt-out, too. Proponents of psilocybin services will be especially disappointed with this outcome: Clackamas voters endorsed Measure 109 back in 2020, but have now changed their minds.

Early results from Clatsop County, which also endorsed psilocybin services just two years ago, will also disappoint this crowd. Voters endorsed a temporary ban on psilocybin businesses. Both Clackamas and Clatsop have plenty of ‘safe haven’ cities, though.

Voters in the City of Philomath, in Benton County, supported Measure 109 at a whopping rate of 60% just two years ago. On Tuesday, however, voters changed their tune with over 50% of early votes supporting a moratorium on psilocybin services. Benton county itself, however, did not opt out.

The importance of public education and engagement

On the positive side: in Deschutes County, voters convincingly rejected the opt-out. Indeed, some residents in the county formed a campaign group to oppose the opt-out measure, which appears to have been a success.

On this point Sam Chapman, Executive Director of the Healing Advocacy Fund, told Psychedelic Alpha that this shows that “when people hear about the potential of psilocybin therapy from their own community members, they understand why it’s important”.

The geography of opt-outs has equity and access implications

Despite safe haven cities, some Oregoniains will need to travel quite a distance to visit a psilocybin service centre (or, a manufacturing facility or lab). Victor Cabral, Director of Policy at psychedelic therapist training company Fluence, told Psychedelic Alpha that these opt-outs will impact cost and access for everyone involved, “from clinicians and manufacturers to community members seeking treatment.”

It’s not only travel that could act as a barrier to psilocybin services practitioners and clients, however. Earlier this week, Oregon-based psilocybin training program Earth Medicine Center scrapped its plans to move forward with a facilitator training program. The group cited “several logistical reasons” as well as personal considerations. Chief among the logistical issues cited was the fact that Oregon’s Higher Education Coordinating Commission (HECC) would oversee the training and licensing of psilocybin facilitators in the state, which came as a surprise to many. “Our business model, when coupled with the HECC requirements, is simply not sustainable from a financial perspective,” the group wrote in an email update.

On a more positive note, Cabral explained that, “the hope is that over time, successful implementation and improvement of the Measure 109 program in counties that opt-in will lead to wider adoption across the state.”

Chapman agreed, predicting that “as the therapy gets implemented in Oregon communities in 2023 and beyond, voters will continue to learn about how it can help address our state’s mental health crisis, and over time access will only continue to expand.”

Despite a chill on fundraising activity this calendar year, the past few weeks have seen a number of large raises (e.g., Empyrean Neuroscience’s $22m Series A; Lusaris Therapeutics’ $60m Series A).

This week saw another significant Series A round in the psychedelics space, this time from Boston-based Sensorium Therapeutics. The $30m Series A financing was led by Santé Ventures, with participation from Route 66 Ventures, CU Healthcare Innovation Fund, and others.

Sensorium, which counts Dr. Jerry Rosenbaum, Dr. Jacob Hooker and Dr. Stephen Haggarty as scientific co-founders, is looking to better understand how psychoactive molecules impact the brain. The company hopes to leverage machine learning to build on “evidence of efficacy and safety based on extensive long-term human use of plants and fungi”, touting a ‘Biodynamic Discovery Platform’ which serves as a drug discovery engine. 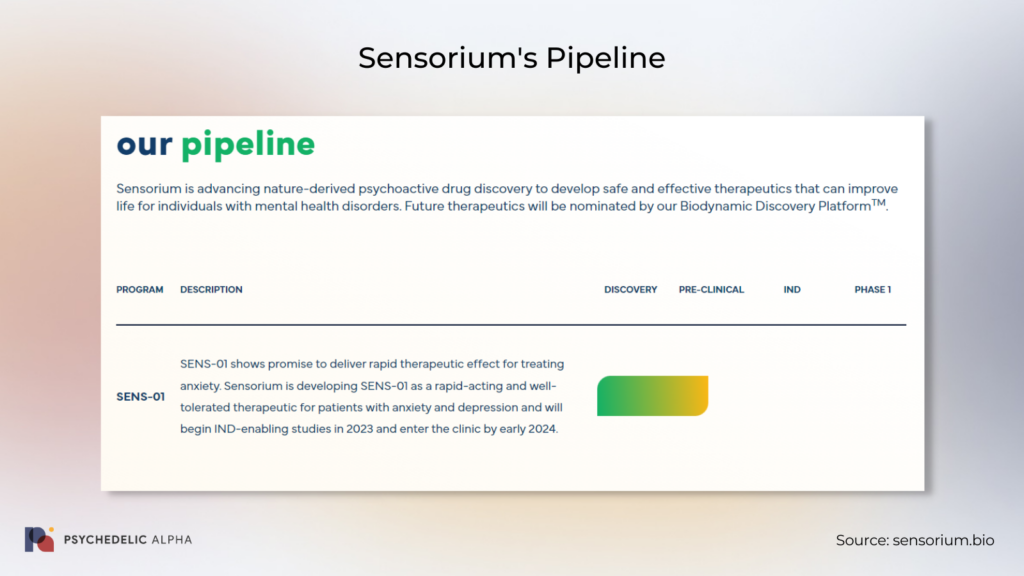 The company’s initial candidate, SENS-01, targets anxiety and depression. The company expects to begin IND-enabling studies next year, with human studies to commence by early 2024.

Next week, we take a look ahead to one of the most eagerly anticipated data readouts of this year, Perception Neuroscience’s (part of the atai platform) PCN-101.

“Well that’s toad-ally terrifying”, begins a Facebook post from the National Park Service. The post asks readers to refrain from licking the Sonoran desert toad, which has the ability to produce the “God Molecule”, 5-MeO-DMT.

But, it’s not quite as simple as licking a toad, which produces a number of cardiotoxic alkaloids, as Tandava Retreats founder Joel Brierre told Psychedelic Alpha. Brierre’s retreat centre are staunch proponents of synthetic 5-MeO-DMT, which has benefits beyond the sustainability of the Sonoran desert toad population. “Using 5-MeO-DMT from a living toad creates problems with dosage”, as well as safety, he explained.

Note: We invited Robert A. Villa, president of the Tucson Herpetological Society, to write about these issues in a November 2021 Bulletin, “Bufo alvarius: A Misguided Grail in the Psychedelic Pharmacopeia”.

Ketanserin is a Trip Neutraliser, After All?  |  A new study published in the International Journal of Neuropsychopharmacology suggests that ketanserin can “effectively be used as a planned or rescue option to shorten and attenuate the LSD experience in humans”.

We knew that ketanserin could prevent an LSD trip if it were administered prior to LSD dosing, but this study shows that it can also be effective in flight, so to speak. Others were excited about a related finding of the study, which reported no effects on elevations of Brain Derived Neurotrophic Factor (BDNF) following ketanserin administration.

However, the ever-astute Matthew Baggott pointed out (on Twitter, of course) some important methodological limitations of the study. Another psychedelic researcher, Balázs Szigeti, pointed out that ketanserin appeared to take around two and a half hours to stop the trip; not exactly a rapid trip neutralizer.

Trip Killers  |  On the topic of ketanserin, Andrew Gallimore’s Twitter thread on a variety of ‘trip killers’, “from vitamin B3 to ketanserin”, is well worth a read.

FT on Drugs  |  Financial Times’ Jemima Kelly asks if psychedelics and business could make for a bad trip, as “brash new investors are clashing with the pioneers of mind-altering drug therapies”.

“Draconian” Rules Hold Back Psychedelic Research in UK  |  Leading scientists tell The Guardian that “Draconian licensing rules and a lack of public funding are holding back the emerging field of psychedelic medicine in the UK”.

UW Researchers Employ Innovative Study Design  |  A profile of the University of Wisconsin-Madison Transdisciplinary Center for Research in Psychoactive Substances explores some of the work housed at the centre, including an intriguing study that we have had our eye on for some time.

The study in question sees psilocybin administered alongside midazolam, in an attempt to remove one’s ability to remember the mushroom trip. The results might help us better understand the role of memory in psychedelic experiences, which could lead to broader insights into whether the subjective effects of psychedelics are a prerequisite for realising their apparent therapeutic benefits.

More than Meets the Eye?  |  A new paper by Marco Aqil and Leor Roseman explores the neglected role of sensory alterations in psychedelic experiences, with a focus on visual hallucinations. Roseman shared a great Twitter thread introducing the paper and its main thrusts.

Psychedelics Could Transform End-of-Life Care  |  Slate’s State of Mind section explores how psychedelic-assisted therapy can help reduce anxiety for patients at the end of life.

Turnbull’s Not for Turning  |  Last week, we reported that Carey Turnbull “looks set to flip his nonprofit psilocybin for alcohol use disorder organisation, B.More, into a for-profit entity.”

In response, Turnbull told Psychedelic Alpha that “B.More has no plans to change its non-profit status and intends to continue operating as a non-profit organisation.” Turnbull continued to explain that, given the need to fund future clinical trials, his organisation is continuing to raise philanthropic contributions while also pursuing “other capital sources available to non-profit organisations.”

Psychedelic Bulletin #102 – Our Analysis of MindMed’s LSD for Anxiety Results; Mail-Order Ketamine May Come Under Scrutiny; Our Notes from PSYCH Symposium